A history of goals… 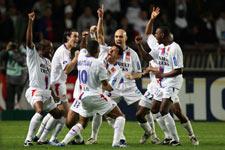 In the Champions League, the honour goes to Junhino who scored in the fourth minute against Olympiakos at the Stade Gerland. His compatriot Fred scored at the other end of the clock – the winner against Rosenborg in the 93rd minute. Babandiga beat Coupet in the third minute of Olympiakos – OL and Shevtchenko ended Lyon’s dreams in the 93rd minute during that famous match at San Siro.

Finally in the Cups, Govou scored the winning goal against Ajaccio in extra-time (113rd minute). The Corsicans had opened the scoring, already in extra-time (95th minute).

Sidney Govou was actually the end of game specialist. Of his eight goals this season, only one came in the first half (v Toulouse). The seven others were scored in the 69th (Lille), 76th (Nice), 83rd (Marseille), 87th (Le Mans), 89th (Olympiakos), 90th (Nantes in the Coupe de la Ligue) and 113th (Ajaccio in the Coupe de France). He also the only player to have scored in four of the five competitions (Ligue 1, Coupe de France, Coupe de la Ligue and the Champions League).

Of OL’s major goal-scorers: Fred scored13 of his17 at the Stade Gerland; Juninho 8 of his 14; Carew 6 of his15 and Wiltord 4 of his 14. Carew and Juninho both scored at least one goal in four consecutive games.
Facebook
Tweet
Forum