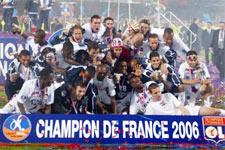 Here are a few statistics relating to Lyon’s season from all 54 official matches. There’s something for everyone…
Number of players used
In the Championnat = 24; in the Trophée des Champions = 14; in the Champions League = 24; in the Coupe de la Ligue = 14; in the Coupe de France = 21. In all, 26 different players played this season. Diatta, Monsoreau, Pedretti, Diarra, Clément, Govou, Malouda and Carew played in all 5 competitions. The young Beynié played the least, just five minutes. Coupet played the most, 4,568 minutes out of a possible 4,920. Cris 4,411…

Red and Yellow Cards
In the league, 20 players received 65 yellow cards… Diarra and Tiago 8; Malouda 6; Juninho and Fred 5; Carew and Cris 4; Réveillère, Pedretti, Berthod, Govou and Clément 3; Cacapa and Monsoreau 2; Frau, Coupet, Diatta, Abidal, Clerc and Benzema 1. Only Wiltord, with a considerable playing time did not receive a card along with Vercoutre, Ben Arfa and Müller. In the other competitions OL received 25 yellows: Juninho 4; Tiago, Diarra and Malouda 3; Pedretti 2; Carew, Réveillère, Cacapa, Berthod, Govou, Fred, Coupet, Cris, Abidal and Wiltord 1. As for the reds… 1 in the league for Diatta (v Nantes) and one in the Champions League for Govou (v Eindhoven).

36,314 kms where travelled on official away matches.

[IMG40028#L]Coupet made 348 saves in 51 matches. Of those 348 saves, 44 could be considered decisive at an average of just under 7 saves per games. The average of previous seasons was 6.
Vercoutre made 34 saves including 3 decisive saves in a little over 3 games.

Against Metz at the Stade Gerland Lyon enjoyed the most possession of the season when they held the ball for 37 minutes and 28 seconds as opposed to 18 minutes and 26 seconds for the visitors. In other 67% in favour of the quintuple French champions.

105 goals were scored, including 22 headers; 67 right-footed and 16 left-footed. 3 penalties scored from a possible four; 8 free-kicks (Juninho); 20 goals from outside the box and 85 from inside.

[IMG40559#R]Juninho scored his 65th goal in an OL shirt and joins Cavéglia and Kabongo in the OL all-time goalscorers’ charts in ninth place. In the process he scored his 27 Lyon free-kick and 50th league goal.