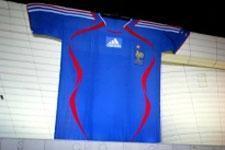 On Sunday morning, France coach Raymond Domenech announced his 23-man squad to travel to Germany and compete in next month's World Cup.
In his 23 were named four Lyon players. Eric Abidal, Florent Malouda, Grégory Coupet and Sylvain Wiltord will all be at the World Cup, starting on June 9.

There were two huge surprises: without ever havng received a full senior international call-up, both Pascal Chimbonda and Franck Ribéry earned their tickets to Germany.

Raymond Domenech also revealed who would be his first choice 'keeper for the tournament. Despite a fabulous season from Grégory Coupet, the coach chose to start with Marseille's Fabien Barthez.
Facebook
Tweet
Forum