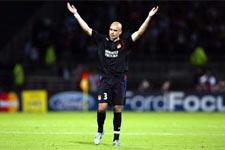 The final match of the season was preceded by the great news that Brazilian defender Cris will be at Lyon next season after signing a new contract, tying him to the French champions until 2010.
It is so hard to imagine The Policeman keeping law and order in any other club than Lyon. The French champions and the Brazil defender had to reach agreement and now it’s done. Cris will not just be at Lyon next season, but he has extended his current contract until 2010. It’s great news for the fans and also underlines, just days before the start of the annual transfer saga, that OL has all the ambition in the world for the future.
Videos
Facebook
Tweet
Forum
Videos