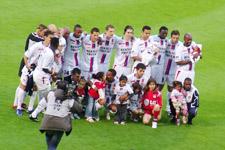 This XXL victory was the best possible way for the French champions to sign off for the summer and whet the appetites for the next campaign. OL was, is, and will remain, a source of incredible joy for its supporters.
While certain teams were still concerned with the battle for third place in the league – a place synonymous with the preliminary round of the Champions League, at the Stade Gerland, the party was already in full swing. And that the party live up to the expectations of the fans, the players and the club, a win was required. The Lyon fans also counted amongst their number the first champions from back on May 4, 2002: Delmotte, Chanelet, Laigle, Laville and Anderson. The five guests of honour received a majestic ovation from the other 40,426 in attendance, before the players ran out onto the field for the last time this term, under the orders of referee, Mr. Colombo.

Malouda opened hostilities on the park, slicing into the area and laying on the champagne service for Fred, who unfortunately fired over. The missed chance at one end was immediately transformed at the other. Grafite had already been denied by Coupet in the fourth minute, but he pierced the OL defence and got his revenge on the France international shot-stopper. Berthod then saved his teammates again with a goal-line clearance to deny Bangoura’s header before Djila released Fred, who this time, made no mistake against Pelé and equalised for the hosts. Cris then gave Lyon the lead... with his back... blocking a clearance from the Le Mans’ ‘keeper (27’). The spectacle moved into top gear when Nino rounded Pelé and added a third from a tight angle (29’, 3-1).
Fréderic Hantz let his frustrations be known, replacing Thomas and Pelé with Fischer and Roche before the break.

The match quickly became a now familiar footballing demonstration. Fred, taking off behind the backs of the defence got his second of the evening as the capacity crowd was treated to an unprecedented goal rout.
Les Manceaux were struggling and Cerdan only made matters worse when he was sent off for bringing down Malouda just outside the penalty box. Juninho converted from the spot and rejoined Cavéglia and Kabongo with 65 goals in Lyon colours.
In the process Juninho entered into the top-ten Lyon goal-scoerers of all time while his side entered the history books with the equal best attack in the club’s history thanks to a trademark mercurial free-kick (43’, 5-1)

In the second half came the substitutes with Nino and Caçapa making way for Govou and Diatta on the hour mark, while Couet underlined his international status, repelling all the opposition attacks. Matsui could only watch as his spectacular bicycle kick was turned away (65’); ditto for Grafite, whose effort was turned behind for a corner (67’). Sidney failed to add his fifth of the season when he fired over on 73 minutes. As for Fred, he profited from a poor clearance by Roche to score his 14th of the season and join Odemwingie in second place on the season scorers’ list. A symbolic goal which saw Olympique Lyonnais, vintage 2005-06 become register the best attack in a single season for the club.

The fans were in seventh heaven and were soon celebrating a seventh goal of the evening when Govou scored before another sub, Ben Arfa, placed the ball onto the head of Tiago five metres out for number eight (88’).

What an evening, full of joy and happiness... all the little disappointments of the season were erased by the brilliance of this Lyon side in full swing. "We are the Champions" was sung in the stands, as the true champions served up another win. This XXL victory was the best possible way for the French champions to sign off for the summer and whet the appetites for the next campaign. OL was, is, and will remain, a source of incredible joy for its supporters.
Facebook
Tweet
Forum