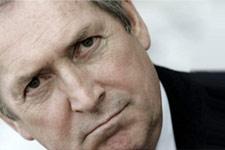 
Karim Benzema is away with the France Under-19s.
Joan Hartock will play with the reserves.

Why 22 players?
I’m taking the entire squad like I did for the Paris match. I can’t take Karim Benzema because he’s been called up to the France Under-19 team. We’ve been a squad for the whole year and we will be right until the end. Of course there will only be 16 players on the teamsheet but everyone will be there to celebrate.

How was the final training of the season?
I’m very lucky to have a squad that likes to be and work together. The players are very good at knowing how not to mix work with pleasure. Today they really trained well and showed a lot of desire. The competitive spirit is still intact.

What type of match do you expect?
I think it will be a very enjoyable game to watch and experience, especially for our fans. I say ‘experience’ because it’s not just a match, but a big event. It’s the final game of the season, at the end of which our captain Claudio Caçapa will be given the league trophy. For everything to go well we need a good match and of course, a win.
Facebook
Tweet
Forum