The numbers ahead of Le Mans 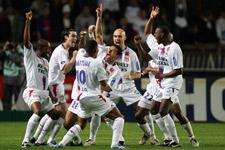 Here are some figures for Les Lyonnais to reach, or even surpass, on the final day of the 2005-06 French league season.
If the gap between OL and Bordeaux is actually 13 points ahead of the final game of the season, there is one domain where that gap is a lot tighter. It’s the number of points amassed in the second half of the season. Les Lyonnais, after taking 44 points in the first half of the campaign have taken 37 fro 17 games since Christmas. As for Les Girondins, they had 32 points at the winter break, but now total 68 – in other words 36 points since the New Year.

Therefore, just one point separates the two sides in this ‘symbolic’ ladder before the respective visits of Le Mans and Marseille. Lyon are well on the way to reproducing their performance of last term when they won both halves of the season.

In terms of scoring goals , Lyon have scored 65, the second highest in the club’s history behind the 1980-81 season. That year they scored 70, with Nikollic leading the way with 21 goals. It will be tough to reach that this weekend…