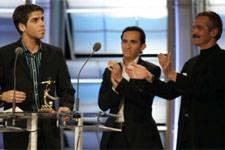 In an evening befitting the Olympia theatre in Paris, in front of the Canal+ cameras, all the big names of French football were on hand for the annual awards ceremony, Les Trophées UNFP, to reward the main stars of the 2005-06 season. OL featured prominently...
Juninho receives the Trophée UNPF for Best Player of the 2005-06 season.
He follows succeeds former teammates Michael Essien. He was named ahead of fellow nominees and teammates Florent Malouda and Sylvain Wiltord as well as the Parisian Pedro Miguel Pauleta.

Also rewarded for his incredile season, Grégory Coupet was awarded the Best Ligue 1 Goalkeeper for the fourth time in his career.

The Best Young Player award went to Marseille’s Franck Ribéry who also received the gong for Best Goal for his Week 15 strike against Nantes on November 19.

Jean-Michel Aulas: These five titles are an incredible achievement, based on stability and loyalty. We can’t thank everyone that played a part in this triumph. Here tonight are two of the four players that won all five league crowns. The three coaches also deserve a huge credit: Jacques Santini, Paul Le Guen and Gérard Houllier. But also everybody else who works for this club in a daily basis such as Bernard Lacombe, Olivier Blanc, Marino Faccioli, Thierry Sauvage as well as all the admin staff who been there, behind the sscenes for the last 19 years.

Juninho: Naturally I’m delighted with this award. I would especially like to thank the staff, but also my teammates for their support. Last year I was close to getting this trophy but it went deservedly to Michael Essien.

Grégory Coupet: I’m all the prouder to receive this trophy looking at the quality of Ligue 1 goalkeepers which is truly exceptional. If I can just name an old ‘keeper who played this position so well and who will soon be stopping his career, then I’d like to thank Christophe Delmotte.
Facebook
Tweet
Forum