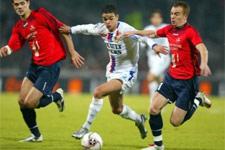 There are only two rounds of the Ligue 1 remaining before holidays for some, and Germany for others. With the champions, second and the bottom three, all decided, the final stake revolve in finishing third and the battle rages between Lille, OM, Rennes and Lens.
The t-shirts read: “Lille-Lyon: I was there for Europe”. It’s obvious that the first side to knock off Lyon this season, were banking on the absence of the champions’ motivation to re-establish a lead over their Marseille rivals.
Use the whole squad for the league, was how Gérard Houllier justified his new-look line-up which featured 8 changes from the starting XI from the derby game a week earlier. Coupet started on the bench for the first time this season, while Juninho, Diarra, Tiago, Cris and Caçapa were left behind altogether.
The changes were also made to the Lille line-up. With a considerable injury list (Tavlaridis, Debuchy, Dumont, Touré, Pichon) and a couple of suspensions (Fauvergue, Mirallas), Claude Puel was within two players of the side that lost the derby to Lens, 2-4, last weekend. Cabaye replaced Lichtsteiner and Schmitz came in for Tavlaridis. The conserve third place and a preliminary Champions League ticked, Odemwingie was alone up front for Lille, while Ben Arfa played the same role for the champions.

An excellent Vercoutre was called upon as early as the fifth minute to deny the Nigerian. The same two were at it again in the 24th and 28th minutes as Vercoutre maintained the upper hand against a more and more dangerous opponent.
At the other end of the field, the Black Panther, Tony Sylva matched his opposite number in his own personal duel with Ben Arfa. He claimed a Monsreau header from a Hatem free-kick (15’) before saving at the feet of the youth international in the area (26’) and when he didn’t come out, Malouda, fed by Ben Arfa, failed to hit the target. (30’).

After half an hour of play, the home side’s counter attacking football would prove cruel on the 1,200 travelling Lyon fans. A one-two between Bodmer and Dernis sent the latter through behind the Lyon defence. The midfielder won the duel with his good mate Vercoutre and Lille had the lead on 34 minutes.
Odemwingie could have doubled the mark but his screwed his shot across the face of the Lyon goal. A new free-kick, this time from Pedretti proved dangerous for the hosts and Sylva was only saved by the woodwork which denied Fred the equaliser (43’). Moments before the break, Abidal let fly with a missile that flew agonisingly wide.

Odemwingie had to wait until the second period to score his 13th and 4th goals of the season. At the end of another counter, the Lille striker beat Rémy with a little lob (49’), before adding a second, moments later, after another Bodmer assist (51’). Gérard Houllier made three changes. Govou, Abidal and Fred all made way for Wiltord, Diatta and Carew (70’).
Vercoutre somehow kept out a Makoun effort with a diving effort. But the score line took on uncomfortable proportions when the very same Jean II Makoun led a solo charge before shooting across goal and inside the far post (85’).

At Mr Ledentu’s final whistle, Lille had a foot on the podium, and a hand in the final qualifying round of next season’s Champions League. In beating Les Gones 4-0 Lille also profited from the draws conceded by Marseille, Rennes and Lens to confirm third spot.
Facebook
Tweet
Forum