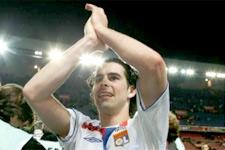 Tiago Mendes turned 25-years-old on May 2, 2006. Born in Viiana do Castelo, the Portugal international arrived at Lyon this summer, from Chelsea. He immediately imposed himself in the OL squad.
39 matches played out of a possible 52 with his debut against Monaco at the Stade Gerland. 36 starts. 4 league goals, against Lens, Marseille, Troyes and Rennes… all four had a direct bearing on the outcome. He also scored a double against PSV Eindhven in the Champions League. He was suspended for the quarter-final return leg against AC Milan at San Siro.

An important part of the Lyon midfield and member of the Golden Triangle, the former Blues player will also be at the World Cup, playing alongqide the likes of Pauleta, Figo, Ricardo Carvahlo… He produced another classy performance against Les Verts last Sunday. Simplicity, precision, generosity and activity. His performance deserved the goal he was so close to scoring with one of six attempts on goal.Happy Birthday Tiago.
Facebook
Tweet
Forum