Thank-you OL! A thousand times over! 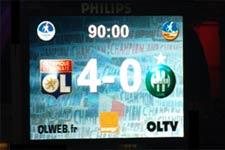 OL 4-0 ASSE: A superb victory for OL against Saint-Etienne. Gérard Houllier’s players celebrated their fifth consecutive league crown in the best of fashions...
At a time when certain teams discover their fate (Strasbourg, Ajaccio and Metz are relegated to L2)… At a time when the end of the championship seems like a mere formality for some... Stripped down, the stakes are to be found elsewhere: pride, honour, and even geographical superiority… Indeed while the league’s statisticians could find little to get excited about, this match meant everything to the two sets of supporters.
“Put on a show and break the 80-point mark,” was how an ambitious Houllier approached his side’s 50th game of the season.
His opposite number, Elie Baup, whose name is being linked with Toulouse, was in little doubt as to the importance of the derby: “It’s a heritage that adds another dimension to this club.” The former Bordeaux coach is expecting a show of pride from his players and that’s what he got. As only the Lyon crossbar stood between his side and a goal at the start and finish of the first period.

Indeed, Coupet had little to do in the opening 45 minutes, unlike his Saint-Etienne counterpart. The crossbar did the hardwork for Lyon, denying Gomis (1’) and then a Sablé free-kick (45’).
The match began at lightning pace as the players lived up to the show put on by the fans just minutes before kick-off. Gomis had opened hostilities, but Tiago answered in kind, drawing a great save from Janot from 25 metres out. It was only a short respite as Nino turned home Juni’s corner in the ninth minute.
Les Gones were turning on the style in their first home match since claiming a fifth title. Tiago released Nino into a shooting position after a superb one-two, but the ball flew into the stands (17’).
Fred was becoming more and more dangerous. He produced an intelligent run and sliced the ball goalwards, only to find the outside of the side-netting (32’) before doubling the lead by beating Hognon and then firing passed Janot (39’). The visitor’s ’keeper also managed to deny Djila on two occasions (27’ et 35’) before Fred’s strike which all-but secured Baup’s 50th defeat in charge of Les Verts.

After the break, Mendy made way for Feindouno to play alongside Piquionne in attack. Zokora then followed Ilunga and Sablé into the referee’s book with the first booking of the second half. Diawara then brought down Juninho in the area and the Brazilian stepped up to fire home (twice) for the third Olympic goal. Fred soon missed the knock-out blow as the game turned into a demonstration.
Ben Arfa and Monsoreau came on to take part in the festivities at the place of Fred and Abidal. Juninho received a standing ovation as he was replaced by Pedretti. Ben did take long to get into the action as he slide in ahead of Janot for the fourth (81’) and Ben Arfa kept the crowd on their feet as he took on the entirety of the Saint-Etienne defence...

Thank-you OL! A thousand times over! You are marching to a wonderful tune. The match was beautiful on the field, as it was in the stands. And with the new points record safely in the pocket, Les Gones underlined once again, their competitive qualities.
Videos
Facebook
Tweet
Forum
Videos