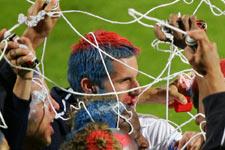 “I’m signing on for another four years with OL”. Sunday, April 30 at 23:40, François Clerc announces he has agreed to extend his current deal. ‘Happy’ and ‘proud’, Lyon the right-back revealed just how happy he was to be staying at ‘his club’.
More than a quality defensive signing just before the off-season, the contract extension also extends the long relationship between the Gerland club and the 23-year-old.
« Having started the season with nothing, it has been unbelievable,” admitted the No.2 in L’Equipe. As Lyon played the first derby this season, on December 11, 2005, Clerc was looking to bounce back from the reserves 4-2 defeat to Racing 92, before hosting Le Pontet… It was exactly one month before ‘The Marseille revelation’ and the start of his emergence from the shadows at the Stade Gerland.

For Sunday’s Week 36 match, Clerc made his 13th start of the season. It was his first start since March 25 and his first derby.
Aware of the supporters’ expectation from such a match, he was discreet early, mastering his defensive duel with Frédéric Mendy (2’, 3’, 14’, 43’). It took until the ninth minute for the right-back to burst forward and cross for Fred. His second foray resulted in a corner (18’).

Efficient, after half an hour’s play he was the games leading ball-winner. Unable to make the slightest impact against young Lyon defender in the first-half, Frédéric Mendy was replaced by Pascal Feinduno while former Olympian David Hellebuyck moved to left-midfield. The former pensioner of Tola Vologe had no more luck than his teammate.

The hour-mark saw the Bressan return to his attacking duties. Thanks to a good Wiltord pass he almost laid on a second goal for Fred as he multiplied his raids forward (57’, 58’, 62’).

After a final acceleration, it appeared he would finally get his first Ligue 1 goal but Janot, quickly of his line extinguished the dream. Minutes later his 30m effort flew just over the crossbar (90’). François Clerc may not have scored, but it was an accomplished return to first team action. Tonight the fans are celebrating the win but also Clerc’s ‘heart-felt’ choice for the club he loves.