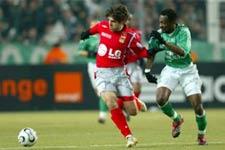 A derby match between Lyon and Saint-Etienne will always remain a special game. It doesn’t really matter at what point in the season it comes, or where the two sides are on the ladder or what’s at stake… For a home derby, not only must one avoid defeat, but victory is almost imperative.
This Sunday, Les Verts will make the short trip to the quituple champions of France. And they’d best beware the fans and players desperate to celebrate their new title together, especially after the defeat to Monaco. Les Stéphanois have little left to play for this season, if it isn’t this mythic rendezvous. A draw, or even an upset victory? That would be a bonus after a disappointing campaign. Without setting the world alight away from home, Saint-Etienne have all the same registered five away wins … all 1-0, not to forget the six draws, they were never truly humbled except at Sochaux, 0-4. If all the pieces come together, Saint-Etienne can still boast a competitive line-up with the quality individualities of Zokora, Hellebuyck and the unpredictable Feindouno. The Guinean scored both home and away last season.

For Lyon, the disappointment of the loss to Monaco was quickly explained away by a natural lapse in concentration after winning a fifth consecutive league crown. Yet it still didn’t please president Jean-Michel Aulas… who has put the pressure on his team ahead of this derby. If he’s looking for reassurances, the president need look no further than the results following the elimination from the Coupe de la Ligue or one of the four other defeats this season… 5 victories. And who could imagine any other result than victory in the Stade Gerland’s 40th Ligue 1 derby? “These games against Saint-Etienne are always a bit different. We know we simply have to win this match... There’s no question of resting on the points gap which separates the two sides. We’ll have to play well to win… We have to look out because Les Verts have got nothing to lose. In the first match the conditions were very difficult. This time all the ingredients are there for a great match of football. This rivalry is part of the two clubs history. May the best team win, and let’s hope it’s OL...” Diarra, Cacapa and Juninho are ready.

The Brazilian midfielder, absent against Monaco, returns to his role as organiser, almost certainly alongside Tiago and Diarra. With Malouda suspended, Gérard Houllier mayo pt for the Wiltord solution on the left. Clerc is back in the squad, but will he start ahead of Réveillère at right-back in his first derby with the pros? Finally, Carew left for Norway in midweek, due to family reasons. That will almost certainly see Fred start his seventh match in a row in France’s best attack.

[IMG40422#R]For Gérard Houllier, this derby is also the chance for a little communing. “I hope we see a real bonding between the supporters and their team. I won’t be talking ‘anti-Verts’ but rather ‘pro-Lyon’. A match with little at stake? I hope that makes for the best possible match. For Lyon, the priority is to win to reach the 80-point mark?” Another way of saying that the Lyon coach will only settle for victory... like always this season.
Videos
Facebook
Tweet
Forum
Videos