Edmilson and Giuly into final 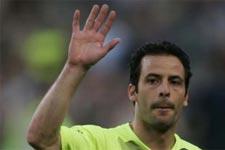 The Brazilian Edmilson and Ludovic Giuly will both be heading to the Stade de France on May 17 for the Champions League final against Arsenal.
Two former Lyon players were key figures in FC Barcelona's semi-final victory over AC Milan. Giuly scored the only goal in the two-legged tie while Edmilson was simply brilliant in linking the defense to the attack. Giuly will dispute his second Champions League final after the 2004 loss with Monaco v Porto. The two players are also almost certain to win back to back Spanish championships this season.

In the final, Giuly will be up against a host of French players in the Arsenal side: Thierry Henry, a former Monaco player like himself, Gaël Clichy, Robert Pires, Mathieu Flamini, without forgetting the coach Arsène Wenger. Edmilson will also be up against his compatriot Gilberto Silva with whom he was crowned World Champion in 2002.
Facebook
Tweet
Forum