Derby: Battle of the ‘keepers 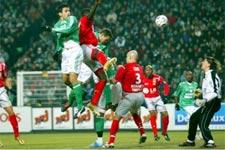 Jérémy Janot has played in four matche with Les Vert against Les Lyonnais for one draw and three losses and eight goals conceded. He has only been up against Grégory Coupet in the OL goal.