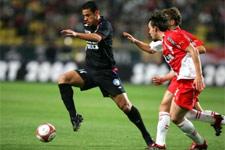 When there’s only the league left and the dice have already been rolled... When there’s only the trophy to lift (again) in four matches time... What could possibly quench Lyon’s thirst? To win in the face of adversity... and never give up...
Inspired, Lyon have not taken their foot of the accelerator and their goals and aims are more than ever mathematic. Because even if this fifth consecutive title put OL in the history books, their are other pages that need writing: the smallest number of away defeats, the biggest number of wins in a season, the highest number of points… the lead over second place.
Unfortunately for Monaco, they don’t have the same arithmetic problems as they draw to towards the end of a 2005-06 campaign a long way from their expectations. Their coach Guidolin claimed in L’Equipe that he will be at the helm next season, despite registering just three wins in 2006 (6 draws and 6 defeats).

Mr Garibian blew for the kick-off in the absence of Juninho, for Lyon, and Vieri, Meriem and Zikos for Monaco. In the opening 30 minutes, this stark opposition in styles failed produce any openings, apart from Malouda’s volley at the back post after a sublime OL passing move which had started a minute earlier (17’).
Yet just after the half-hour, Monaco opened the scoring through Chevanton after good work from Di Vaio. Réveillère only delayed the inevitable when he blocked Di Vaio’s effort on goal just seconds earlier. The Monaco attackers had already been pulled back by Mr Garibian for countless offside infractions, but this time, the Italian Di Vaio released Chevanton with impeccable timing right on the limit. The Uruguayan simply rounded Coupet and slid the ball home for his sixth goal of the season (33’).
1-0 was the score at the half-time break. Nino had given everything to equalise before the pause, but he was a little short to header home Réveillère’s cross (39’) and found Roma in the Monaco goal after wriggling through the locals’ defence (41’).

After the break, Réveillère remained in the changing-rooms as a precautionary measure. Müller came into the game and Caçapa moved to the right side of the defence.

Lyon fans had to wait to stoppage time to finally see Roma pick the ball out of his own net after Carew had profited from the good work of Tiago to save the side’s honour just seconds before Mr Garibian blew for full time (94’).
But before then, Chevanton had fired in a corner onto the head of Maicon who sent the ball back across the face where the lively Di Vaio blasted the ball past Coupet (57’). Trailing 2-0, Les Gones never gave up, as Cris proved, getting amongst an opposition midfield feeling a too sure of themselves.
Neither Malouda’s effort from 40 metres out (61’), nor Govou’s powerful effort from a deep corner (86’) could beat Roma. Les Lyonnais were not always far from the K.O., like when Maicon sliced his way through before shooting (76’) or the final ball for Di Vaio (92’)… Fortunately, Coupet denied the hosts on both occasions before Carew, who came on for Fred (65’), saved the club’s pride.

Carew’s late goal once again underlined Lyon’s ambitions for this end of season run. Three final matches, the derby and then Lille and Le Mans, and three wins to cap off an incredible season.
Facebook
Tweet
Forum