The class of the champions 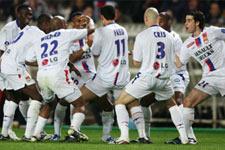 The Olympians showed all their class as they beat PSG 1-0 in Sunday’s big clash. “We’ll win in Paris,” predicted Sidney Govou. As opposed to the crowning match of the 2003/04 season, the five-times French champions weren’t happy with just receiving their medals.
Just as they did last season, Lyon made a point of finishing in style against an in-form PSG side that was overrun and dominated for almost the entire match. Thanks to the win, Les Lyonnais have equalled the record of 12 away wins in a single season, hitherto shared by Marseille (1971/72 and Saint-Etienne (1978/79).

Yet, before kick-off some may have doubted Lyon’s motivation for the match after Bordeaux’s defeat on Saturday definitively handed them their fifth league crown in a row. The results of their joy were to prove spectacular as the players pushed that little bit further, in writing their names into history. With that in mind, there was still plenty to keep Lyon motivated moments before kick-off. First and foremost is to achieve what has never been done before and go an entire season undefeated away from home. “Going undefeated for the whole season is worth a Cup,” declared Gérard Houllier to underline the quality of the potential achievement. With that aim in mind, OL started the match with their traditional starting XI. As in recent weeks, Fred was preferred to Carew up front while Réveillère was at right-back instead of Clerc.

All those fears that Lyon would not be up for the match were laid to rest by Malouda’s stunning runs down the left flank (3’, 10’). Juninho led a perfect start from the visitors and Wiltord was within a whisker of giving them the lead from a controversial action on 20 minutes.
Les Lyonnais were on fire and the Parc responded generously after Letizi was forced to palm away an effort after a neat one-two in the area between Wiltord and Juninho (23’). From the resulting corner the Brazilian deposited the ball on the head of his compatriot Fred who scored his third goal in as many games (24’). OL was pulling out the party pieces as Fred played in Djilla Diarra whose tightrope walking impression carved out another shooting chance, again saved by Letizi under the applause of the Parc (34’). Just before the break, Malouda sent more shivers of apprehension through the stands as his shot was deflected just centimetres wide with Letizi left standing (45’).

Lyon’s play perfectly fulfilled the prophecy delivered earlier in the week by their coach: Our game will benefit from being crowned on Saturday because the players will play without any pressure in Paris.”
The only moments of concern for Grégory Coupet came from two Pauleta shots which passed the wrong side of the woodwork (1’, 40’).

At half-time Guy Lacombe brought on Carlos Bueno in the place of Pauleta. After a good shot over the bar (46’), the Uruguayan deliberately left the mark of his studs on Coupet’s knee (48’) before collapsing on the edge of the area (50’). By the hour mark, however, the Parisian pressure had passed and Lyon returned to the fore. Unfortunately, neither Tiago (64’), Malouda (66’), Fred (69’), Juninho (79’) nor Abidal were able to double the advantage. At the back, Rémy Vercoutre came in to replace Coupet (67’) and he saved his side on two occasions from Kalou (70’) and then Paulo Cesar (71’).
In the final moments Govou crashed an effort off the woodwork and Fred shot again at Letizi (89’). In stoppage time the Brazilian striker almost dribbled the hosts’ ‘keeper but the score board remained unchanged.
The 1,500 Lyon fans sang “Champions de France allez.”
“Our record will just add further value to our championship win,” said Gérard Houllier. After this win, everyone is delighted that OL have been crowned champions so early, now bring on the final games…
Videos
Facebook
Tweet
Forum
Videos