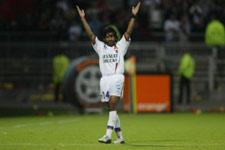 This Sunday will be the 27th meeting between PSG and OL in Paris. The first clash was back in the 1971/72 season when Lyon won, 2-1…
The head to head record:
13 wins for PSG, 8 draws and 5 victories for Olympique Lyonnais. 46 goals scored by PSG compare to 24 by OL.

The Mercato:
The return of Paulo Cesar from loan spell witll Santos and the departure of Ibisevic to Dijon.

32 goals for, 15 against; they are the fourth ranked home team in the league, 3 points behind Lyon.
At home, PSG have beaten Bordeaux, Auxerre, Rennes, Lille – the three teams fighting for the Champions League place…

In the overall standings: PSG is 8th with 50 points, one point behind Marseille. The Parisians are 25 points behind Lyon.
PSG held top spot three times this season and was second for eight rounds.

Cautions:
Sylvain Armand and Edouard Cissé have both been sent off twice…