OL miss out on semis 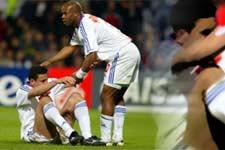 One of the club’s main aims has failed… The disappointment was there for all to see on the faces of the players and supporters at the end of the match. Earlier in the day PSG defeated Lille. The Coupe de France as gone… but she’ll be back next year.
To take the club to the Stade de France was to be the players’ gift to the supporters. And to quote coach Gérard Houllier, the Cup has always been a human adventure. While awaiting the official crowning as champions of France, the team continued to turnover, in the eternal search for freshness. With that in mind Caçapa, Benzema and Pedretti were rested. Müller replaced Claudio just behind the midfield’s Golden Triangle. Up front, Fred, full of confidence started ahead of Carew.

In a stadium near to full, it took less than five minutes for Juninho to fire off his first shot on goal with the dead ball. From 30 metres out, he sent the leather orb flashing just centimetres wide of Barthez’s post.
As for the visitors, it took Marseille a good 15 minutes to carve out an opening. But the patience paid off. While Ribéry’s corner didn’t find any takers, Maoulida profited from Beye’s hopeful ball back into the box, while Niang was clearly offside. Yet while the linesman rushed back into position the former Monaco player ignored his passive off-side teammate to beat Coupet.
Lyon reacted immediately and less than a minute later Abidal found Tiago on the edge of the area, but the Portugal international couldn’t force the opposition ‘keeper into a save. The same went for Fred, whose header was comfortably saved by Barthez. The match suddenly rose in intensity and Lyon came alive… Led by Fred… more determined than ever as Juninho’s corner found him at the back post. The Brazilian’s reflexes left the OM defence standing andhe rifled he ball into the back of the net first time (22’, 1-1).
The in-form Malouda was causing headaches for the Marseille defence and he earned another chance for Juninho to try his luck with a second free-kick. Once again the Brazilian’s effort flew wide (30’). As the seconds ticked away towards half-time, Tiago’s 30m effort brought no change to scoreboard (40’) and neither did Wiltord’s which, deflected, flirted with the outside of Barthez’s upright.

The visitors were on the ropes and committed rpeated foulsin trying to hang on. The two sides went to the break level, even if Lyon playing at home, had created the more inviting chances.

Shortly after the break Juninho joined Abidal in Mr Layec’s little black book for a foul on Ribéry. Abidal had illegally halted Maoulida’s progress moments earlier on the edge of the area. Taiwo was also booked for taking a free-kick too quickly. Malouda then followed the Nigerian into the book for breaking prematurely from the wall and in the end the free-kick cannoned off the Lyon barrier…
After Ribéry had escaped down the left, Lamouchi fired over from the edge of the area (63’). I twas the same Ribéry that then took off down the right before releasing Niang through on goal. The Senegal international rid himself of the attentions of Réveillère before beating Coupet (65’, 1-2).

It was the time for changes. Govou came in for Diarra, agis made way for Nasri. A neat triangle between Wiltord - Malouda – Tiago put Nino into a shooting position but once again Barthez’s goal remained intact and the scoreboard unchanged. Lyon showed its hand by bringing on Carew for Abidal (80’).

In stoppage time Taiwo saw red for blocking off Réveillère. From the resulting free-kick Juninho fired another free-kick into the mix. Barthez could only punch as far as Govou who, with all the goal to aim at, fired over the bar…