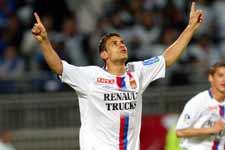 Reactions after the match between Lyon and Nice.
Jérémy Clément: We worked very hard and played a very serious match. We never doubted despite being up against a very good Nice side that pressed very high up the pitch. We managed to get what we wanted: 3 points.
We were really down after the elimination to Milan but the coach told us not to give up and reminded us that we simply have to win the league and the Coupe de France.
It’s amazing to play in such an ambitious side. Tonight was my first start in a home match for Lyon.

Gérard Houllier: It’s a very special win, because it’s probably the one that wins us the title. Now we can be crowned in Paris if Bordeaux don’t beat Lille the day before. We weren’t on one of our best days today. We really had to battle to overcome the disappointment of losing to Milan. I knew it wouldn’t be our best match of the season but I’d like to congratulate the players for being so strong. We were a bit laborious in our build up but, mentally, the players were there.
We had a bad opening 20 minutes where we failed to play our football, but we were never put in danger. Fred’s goal woke everybody up and we started looking more attacking. The goal we conceded reminded me of the one against Toulouse. A free-kick at one end, followed by a counterattack and a goal at the other. At half time I reminded them that we were just 45 minutes away from the title.
The explanation for our performance is very simple: we are men. We were all very affected by the defeat on Tuesday. It set off a sort of depression within our ranks. Again, I have to take my hat off to the players who put their disappointment to one side in order to win.

Grégory Coupet: It was a tough match but we were ready for that. We lacked the enthusiasm and euphoria that we normally bring to a match. That made things more difficult.
At half-time we talked a lot and reiterated our ambition to be crowned champions as soon as possible.
I got a bit angry at certain moments because last Tuesday we saw a Shevchenko and an Inzaghi that never once hesitated to chase back at defend, right up until the end. When the title is within arm’s reach you have to give everything to get safely in your grasp.
Now we have to turn towards the next match against OM which will be a big match. In any case, we only have big games left, against Saint-Etienne, Lille, semi-finals and final of the Coupe de France. We can’t take the foot off the accelerator.

Fred: The last few days have been really, very hard after the defeat to AC Milan in the Champions League. Very, very hard. We can’t sleep. So it was really good to play again straight away. Winning is a great relief.
I don’t know if my hair was preventing me from scoring but I’d like to thank my hairdreser Bernard it swore there had to be a reason. Now we’re so close to a fifth title that we’ll be sending all our bad vibes to Bordeaux so that they don’t beat Lille next week.