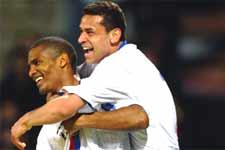 Crowned this evening, albeit with a few ‘ifs and buts’... and beat a few records along the way… without forgetting the possible double… OL was just a few matches away from creating history before taking on OGC Nice on Saturday…
In playing in three different competitions in seven days, Lyon is playing musical chairs in this end of season period. Carew, Diarra, Clerc and Wiltord were rested, Juninho started on the bench, Réveillère and Clément took their places in the starting XI.

Speaking od rested... Echouafni, Traoré and Varrault were also given the night off by Nice coach Frédéric Antonetti. Embeded in mid-table, Les Aiglons have nothing left to play for from the 2005-06 league season where they have switched between the good (at home) and the less good (away). Nice has eyes on only one prize: the final of the Coupe de la Ligue next 22 April against Nancy... With qualification for the UEFA Cup accompanying victory, that match is objective no.1 to save the side’s otherwise average season…

In a stadium decked out in red, white and blue, the French champions and their visitors were locked scoreless after 20 minutes, despite chances at both ends. Anthony Réveillère opened hostilities with a pin-point cross for Fred. The Brazilian hovered in the air and fired his header goalwards, only to see it saved by the brilliant Lloris (11’). Coupet, well-placed, also denied Bagayoko (14’) and then koné (17’), who shot well after winning back possession.
Finally the new-look Fred opened the scoring. Capitalising from a blocked Tiago effort, he controlled, turned and shot past Lloris.
Abidal and Malouda combined well down the left to cause the Nice defence problems. Abidal beat Yahia before crossing for Fred... (27’).
Malouda then crossed for Govou, but Sid’s outside of the right foot effort flew just wide (33’). Jariat went into the book, unazble to control the effervescent No.10.

Up the other end, Nice let fly with a killer counter attack. ‘PitBull’ Balmont released Rool whose pass found Ederson up against Coupet. He cut inside Réveillère and his curling effort beat Coupet with the aid of the upright. It was almost a carbon copy of the Toulouse goal two weeks ago!

In the second half, Malouda was recompensed for his efforts. Brilliant against AC Milan, good off the bench against Troyes, this time he sent a stinging left-foot volley from the edge of the area, fizzing across the face and inside the far corner of Lloris’ goal for his sixth strike of the season (50’).