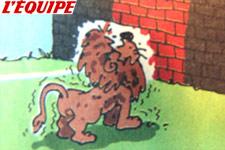 Take a little tour of the day’s press in the wake of Lyon’s defeat to AC Milan.
“How hard it is.” With this headline, L’Equipe greeted its readers on Wednesday morning before continuing in its editorial: “What a hard lesson to learn!” The article ends with a comment laced with disappointment and resignation: “The fifth consecutive league crown is already in the bag, but it doesn’t make up for having missed out on Europe again.” Noting the excellent performance of Mahamadou Diarra, given 7.5 like Sylvain Wiltord, the daily sports paper went with “Diarra kept the faith” before analysing the individual performances, including that of “Juninho [who] stood up to be counted.’ Egally awaited by the Olympian supporters, the Brazilian was “delivered all that was expected of him.” There was also a special mention for the man of the match: “Inzaghi succeeded.”
Vincent Duluc described the disappointment that gripped the Lyon camp as their “dream took flight” but also claimed “OL deserved so much more.” After dominating from start to finish but eliminated in the final seconds, Les Gones quit the stage bitterly disappointed. L’Equipe bemoans this “cruel and giant Europe” which “taught them a cruel lesson”: “Lyon paid dearly for two defensive errors”.
The paper then quoted both coaches who said the same thing. Gérard Houllier regretted letting their qualification slip away “just two minutes from time”, while Carlo Ancelotti credited the qualification of his side to their experience and character: “We were good and lucky,” admitted the Milan coach.

The paper’s website L’Equipe.fr went with a similar lead, claiming the Italians’ experience was the key to qualification: “It’s a way of life” it said before describing the scenes of sadness within the ranks of the Lyon travelling support: “More Lyon heart-break”. Cédric Rouquette rued “the two turnovers, so punishable at this level” and the “too long final five minutes, the worst of OL’s season, the worst of several players’ careers…”

Le Progrès described in the front page “the immense disappointment of Coupet, Diarra, Caçapa, Cris and all Les Lyonnais” under the headline “Milan misery for OL”. “From dream to nightmare”, Les Gones believed right up until the 88th minute. It’s “terribly cruel”. The regional paper rued this “cruel finale” for a Lyon side which showed “exemplary work, clear-thinking and skill” and concluded with: “here, at football’s La Scala, OL’s recital was shattered by a final scene tragedy.”

“What sadness,” read Aujourd’hui en France before continuing with the “cruel exit” which saw Lyon “stripped of its great continental dream and now faced with an obligation to win the league and cup double to save its season.”

“Milan on the line” was the title on UEFA.com. The ‘European football website’ applauded the “superb display of force” from both teams before noting that “the gates to history have temporarily shut before Gérard Houllier’s men.”
Facebook
Tweet
Forum