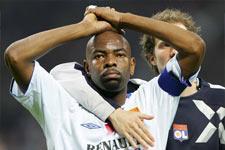 Reactions following the match between AC Milan and OL.
Jean-Michel Aulas: It’s a huge disappointment. Tonight we saw a very good Olympique Lyonnais. We were just three minutes away from qualifying. Thez positive thing is that we weren’t dominated by AC Milan and we created more opening than them. Their experience played in their favour. For us, it’s another hard lesson learnt. Now we have to try and pick out the positives from this evening’s performance.
Before the match, we had three goals, now we have two.
The defeat isn’t as bitter as last year when we lost because the referee didn’t give a penalty in the last minute. Milan should be congratulated, they had four chances and they scored three times.
We showed once again that we are a big club.
The Lyon fans in the stadium were incredible and that’s why the players went back out to thank them at the end.
Now we have to knuckle down for Saturday’s match against Nice in order to win an unprecedented fifth consecutive league crown. That will be amazing.
Sometimes you have to know how to lose in order to win. We’ll start again next season on a new European adventure, hoping to go further that time.

Ludovic Giuly: It’s really tough. Against a very good Milan team, Lyon played really very well. Tonight OL did everything they had to do, even if, in the end, they go home empty handed.

Robert Duverne: What a massive disappointment. The score doesn’t even matter. When we get so close to the semi-finals, it’s obviously a huge disappointment. Now we have to start again from zero next year.
We showed great daring in our play. We did what we had to do. Perhaps part of this tie was lost at the Stade Gerland. We certainly weren’t outplayed. They were absolutely deadly in front of goal.

François Clerc: Of course we’re very upset. We deserved to make the semi-finals. They qualified thanks to some sort of miracle.
We held them at bay up until the final five minutes.
We didn’t have any luck from a long ball, Shevchenko’s shot came off both posts... it’s sad but that’s football...

Claudio Caçapa: We are extremely upset. They are so lucky. We were strong right up until the final seconds. We constructed some really good football.
We mustn’t lose all hope now. We still have a lot to play for. We still have the championship and the Coupe de France.

Pierre Laigle: Of course it’s bitterly disappointing for the players and all the fans, of which I’m one myself. But you have to acknowledge that opposite was AC Milan, not just any old team.
The good thing for Olympique Lyonnais is that they can get stuck straight back into the championship this Saturday. To win the League and Cup means it won’t have ruined the season.

Gérard Houllier: Over the two matches we deserved to qualify. I’m very proud and I’d like to congratulate the players. It’s a great disappointment for the players and the supporters who made the trip. That’s football. Football brings great highs and great lows. Tonight it’s a huge disappointment.
We made mistakes that cost us dearly and we didn’t put our chances away. Against a team like Milan, with its attacking potential, you pay cash every time.
We wanted to attack and show that we wouldn’t back down.
We’re first in our league with a 12-point lead and I think we’ll be champions. The objective is also to win the Coupe de France.
It’s out of hardship that we comeback even stronger. You will see that that will be the case with my team.

Cris: Everyone is sad. I think Milan were very lucky. It’s a shame because we played very well right up until the 88th minute. The ball hit both posts... I’m really upset. We had a real chance to go into the semi-finals.
Over the two games, AC Milan wasn�t any stronger than us. They only started playing in the second half. It’s amazing... we were playing so well and then we conceded that goal in the dying seconds… It will be hard to get over, but we’ll try and focus on the league and the Coupe de France.
I’d also like to send a big ‘bravo’ to the supporters. They were magnificent. I would like to thank them because they follow us and support us always.