A little look at the press... 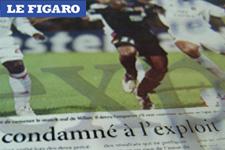 Due to a widespread strike in France on Tuesday 4 April, very few newspapers were available...
Le Progrès headline: “OL: Historic Rendezvous.” The regional daily reaffirms the importance of tonight’s match: “Tonight’s the night” before continuing: “OL will try and book their place among Europe’s giants, a perilous mission, but not impossible.”
While noting that “Milan’s stadium is a modern monument to football,” Christian Lanier maintains that “OL could not dream over a better setting to play the biggest match in their history.” He also predicts that “Lyon will grind to a halt and all of France will move to the rhythm of the round ball.”
The journalist finsihes on a positive note: “If Les Lyonnais can ignore their surroundings they have a chance of succeeding and returning to Lyon heroes.” Jean-François Gomez, however, warns against “a Ukrainian ready to bounce back.” The Ukrainien, an “exceptional goalscorer”, hasn’t forgotten that night against Liverpool and is ready “to pile on Lyon’s misery.”
Finally, Jean-Michel Larqué who previewed the quarter-final believes the key to be: “the importance of making a good start.”

Le Figaro Lyon states that “OL is in Milan to cause a huge upset rather than pass an evening in a spectacular stadium”, before adding: “OL will have to play out of their skins iof they are to continue their Champions League adventure.” In hoping for a positive answer, Thibaut Danancher asks: “Do Les Lyonnais have large enough shoulders to carry the weight of pressure into such a massive match?” He ends by noting the incredible public reaction to Lyon’s continental campaign: “Tonight OL has the chance to write a new page in its history books. And perhaps to imbed itself in the hearts of France for years to come.”

Realistic regarding the task facing Lyon, UEFA.com predicts that “OL will not have an easy task at San Siro”, while acknowledging how close the club is to an incredible achievement: “Olympique Lyonnais is 90 minutes from a place in the history of French football”. The “European football website describes the head-to-head between these two sides with such differing records. It cites that “AC Milan have already played in ten Champions League semi-finals against none for Lyon”, and describes the confrontation as between “a traditional giant with a record as long as one’s arms against a Johnny come lately just cutting its teeth”. Tonight, Lyon “stand at the frontier between history and ordinary.”
Banking on a start for Benoit Pedretti in place of Tiago, UEFA.com headline with: “Benoît Pedretti counter-attacks” and claims the Lyon midfielder could “be recompensed for his patience with a semi-final in the Champions League.”