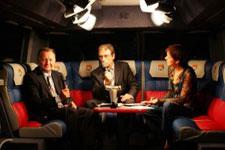 Reactions to Olympique Lyonnais’ 1-0 away win over Troyes...
Sidney Govou: We knew it was going to be a difficult match because Troyes play good football and the pitch wasn’t in great shape. We were able to score at a good time, but we also have to pay credit to the saves of Greg (Coupet) who was once again, able to do what was needed in the first half to see us through.
All the same, the further we go in the calendar, the closing we get to the title. We still need three more wins. We’ll do everything we can to get as soon as possible. For players like me that love to run with the ball, the state of the pitch didn’t help. Now we’ll turn to the match against Milan next Tuesday. It’s going to be great. As to whether I start or not, that’s for the coach to decide and I’ll live with it.

Sylvain Monsoreau: We weren’t good in the first half but all credit to Troyes who really ran the start of the match. They managed brilliantly to get us in trouble down the flanks. In the second period, we were better physically which enabled us to create more openings. This win does us the world of good just four days from our trip to Milan.
Against them, we can’t afford to be slow getting into the game. In front of the all our fans that are making the trip to support us, it’s up to us to return the favour and qualify for the quarter-finals.

Gérard Houllier: What I’ll take away from this match is the win and the three points that go with it. We were solid and that’s the main thing. The match took place in difficult conditions and I congratulate the players for their performance. I started with a new-look defence that didn’t concede a goal and I’m happy because the team showed it has character.
We deserved to win more against Toulouse, but that’s football. Over the course of the season there are often matches like this. You just have to accept it. All the same, 1-0 doesn’t seem completely absurd, but quite deserved.
I’m satisfied because the team defended very well, in numbers.
Concerning the performance of Grégory Coupet, I remind you that to win top flight matches you need to have players that can make the difference. Against PSV he already made one outstanding save before Juninho scored the winning goal. Greg is a class above.
Now I’ll be supporting PSG against Bordeaux tomorrow.
On Tuesday we can’t afford to reproduce the same start to the match as on Wednesday. In the opening 20 minutes my team was too busy star gazing. It was the first time I’ve ever seen that to that extent. Milan put together two or three brilliant moves that completely paralysed us. We then had to produce a few good moves of our own to get the machine running smoothly again.
I’ve got about 90% of my starting XI picked for Tuesday. We have to be confident. Away from home, we’ve always managed to score. I’m convinced that tonight’s match is a good sign for the game against Milan.

Jean-Michel Aulas: I’m delighted by the result. It certainly wasn’t easy. It was a tough match for a number of reasons: Troyes’ determination, the state of the pitch, it’s also very hard to motivate the players in between two big European clashes, to give everything they have. They’re always unconsciously worried about putting their foot or head somewhere where there’s a risk of getting injured, whereas they’ll put it in there against Milan.
I came across an interesting statistic earlier: in a quarter-final between Real Madrid and Manchester United in the 1999-2000 season, Real were held to a 0-0 draw at the Estadio Bernabeu before winning 3-2 at old Trafford and going on to beat Valencia in the final of the Champions League at the Stade de France.
Concerning the match against Milan I’ve been listening to the players. I felt they were more reassured after the match than before it. Also, according to the statistics, we’ve got a 31% chance of qualifying after the first home game ends scoreless, but in the last five years, that figure rises to 50%.
This season is obviously the most exciting because we’re playing on three fronts, which has never happened before, with a large squad which enabled us to come to Troyes and win tonight.