OL quit Champagne with the win 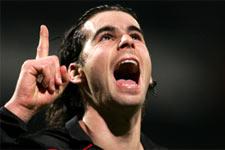 OL is still juggling with its vairous commitments... Coach Houllier is juggling players
Still alive on three fronts (Ligue 1, Coupe de France, Champions League), certain players were rested with one eye on Tuesday’s match at the San Siro.
Wiltord, Cris, Abidal and Clerc were given the evening off, Berthod and Ben Arfa are with the reserves, the Lyon defence was switched around which gave Réveillère and Monsoreau the chance to make their league returns.

As is his habit, Coupet was straight into his stride at the start of the match. And lucky he was because Troyes started the match with all guns blazing.
Bangoura capitalised on a moment’s hesitation between Müller and Diatta – an untried central defence pairing – to worry ‘Greg’ but the OL ‘keeper prevailed (4’). Nivet then tried his hand at opening the mark. It seemed a certain goal as it left the boot from 11m out, but that wasn’t counting on Coupet’s incredible save. Bangoura was at it again with a volley from a corner, off target… Three shots to none, in favour of the locals. ESTAC had taken the match by the scruff of the neck. Juninho released Govou with a majestic pass. The Lyon No.14 chipped his shot and it flew just centimetres wide (28’).
Coupet then produced another exceptional save to push Nivet’s free-kick onto the woodwork. In a similar routine at the other end, Juninho sent to bal lover the wall, but it wasn’t on target.
Les Lyonnais began to come into their own. Govou played in Karim Benzema who beat Le Crom, only to see Poissy, save his side (36’). The youth international then tried his luck from 25m out only to see the ball kiss the crossbar on its way behind (38’).

OL had suffered during the first half, but finally had their heads above water. During the break, the rain hammered down on the Stade de l’Aube which didn’t help the already challenging condition of the pitch.

After the pause, Fred let fly with a crisp shot after good work from Monsoreau, but Le Crom made the save. Nivet again got into a good shooting position, only to see his effort cleared by Fred.

In such a scrappy affair, between a team fighting for their survival and another fighting for the title, the breakthrough was always going to come from a set piece. Juninho was always going to provide the answer. His first free-kick was headed away by Bangoura… the second, down the middle was too high (64’)… the third went the same way (69’)…
Malouda and Carew, were introduced into the fray and were immediately into the action. The former crossed for the latter, but Paisley cleared the ball away in the nick of time.
The coaching soon paid off, however, when the two subs earned a corner, taken by Juninho, which found the head of Tiago to open the scoring (75’). The Portugal international added another to his goal tally which now reads four in L1 this season. It wasn’t far away from being 2-0 when Juninho released Carew, however the Norwegians shot failed to beat Le Crom with Malouda in attendance.
Coupet ended the match how he had begun it, with a stunning save to deny Troyes a share of the spoils.

Jean-Marc Furlan’s team needs points more than ever if they are to avoid being overtaken by Strasbourg and must now prepare for their games against Metz and Ajaccio to ensire their Ligue 1 futures.
As for Lyon, the title is ever nearer, but one record is already safely in the pocket: with 38 points amassed since their last away defeat to Caen on 4 March 2005, OL has already written a new page into its history book… more to come…
Facebook
Tweet
Forum