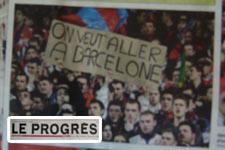 The morning’s press is filled with reports and analysis of OL’s draw with AC Milan. They all salute the remarkable performance of Grégory Coupet and point to the burgeoning hope before the return leg.
"You have to believe…"is the front page headline of L’Equipe with a photo of Grégory Coupet stretched to the limit – the Lyon ‘keeper was once again invaluable. Grégory Coupet was back again on page five and Hervé Penot writes: “Their goalkeeper prevented OL from going under in the first half. Lyon can count in him.” Penot goes onto analyse the shot-stopper’s performance: “28 possessions, 4 real saves, not a single fumble and not a single poor clearance.”
The daily sports paper also picked out one phrase from Gérard Houllier: “We showed them too much respect,” and one from his opposite number Carlo Ancelotti: “Lyon are very strong” ».

Libération: “Lyon have only one more chance to rediscover the fire.” Olivier Bertrand suggests the absence of Juninho was a huge blow for Lyon who as a result were overwhelmed by the Milan defence. He then concludes by citing the last time Lyon went to the San Siro, against Inter Milan, they won 2-1.

Aujourd'hui en France : If the daily national focused on the opposition to the CPE bill, it didn’t forget about Lyon on the front page with the following headline: “Les Lyonnais powerless”
Inside a double page spread is reserved for the match: “Olympique Lyonnais still have the right to dream.” The perrformance of Coupet is dissected and applauded and the match is analysed. A match which, suggests the paper, holds a lot of hope for Lyon and the return of the explosive Juninho.

A whole page of photos of the supporters which really capture the atmosphere and fervour behind the club.
The headlines follow, all of which suggest Lyon is still on track for the semi-finals. Coupet’s performance is once again highlighted, as is that of Caçapa.
The editorial of Jacques Eloi: “Caçapa and Co certainly passed the test in hell against the giants with flying colours. Their hopes are certainly not misplaced. Go forth children, your country is waiting for you!”

On Uefa.com, Gérard Houllier, stated his side showed “too much respect.” The European football website added that the French champions “lacked their usual cutting edge” and saluted the performance of a ”world-class Gregory Coupet.” His display maintains OL’s realistic chances of progressing in six days time at the San Siro in “the most important match in the club’s history.”
Facebook
Tweet
Forum