Rendez-vous at the San Siro... 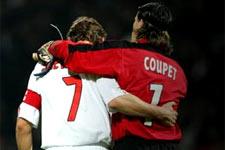 So here we are! This historic football match that promoted so much hype.

The city stopped moving... the whole country was talking about it… All eyes were fixed on the Stade Gerland, who for one evening borrowed the Old Trafford’s nickname: The Theatre of Dreams.
An enthralling quarter-final between two fabulous football teams.
The Italian giant. AC Milan, the Italian Dream Team… The offensive might of Serie A’s most potent attack with 70 goals, has also shined in the Champions League with 17 strikes in eight games. And the Lombardy club is in fine form for this end of season. Currently sitting in Juventus’ shadow in the league, Milan, who crushed Bayern Munich in the last round, know their ambitions lie in Europe.

Only Juninho was missing from Gérard Houllier’s squad. They will have to make do… without forgetting the menace hanging over the heads of Tiago and Diarra should they receive another yellow card.
The fifth league crown is almost in the bag and OL have been improving in the Champions League over the last few years and now they want to take the next step against one of Europe’s most prestigious clubs. Lyon aren’t short on arguments and they have 90 minutes to show them, 90 minutes to forget about records and history, even if Lyon are hosting one of world football’s powerhouses.

In a stadium full of colour, light and sound, the white team for this evening kicked-off at Mr Konrad Plautz’s first whistle and set up camp in the Olympian half.
So skilful, calm and individually brilliant, the Rossoneri carved out the first chances of the match, but each time, found Coupet in a state of grace. Shevchenko was the first to set tongues wagging when he left the entire Lyon defence standing only to see Coupet save with his feet (8’). The Lyon ‘keeper was in the action again to deny Shevchenko’s powerful effort from the 11m out, directly in front (13’).
Shevchenko’s movement up front was causing the locals headaches and leaving space for Kaka to show off his superb technique. Fortunately for Les Gones, the Brazilian couldn’t get his first effort on target (13’); he then hooked his cross after eliminating Cris and Clerc on the left (20’); and then found a player more cunning that himself when he tried to beat Abidal (36’).

After 20 minutes, finally got into their rhythm and forced Milan onto the back foot. Set pieces were Lyon’s special weapon and Pedretti was charged with firing the ball into dangerous territory.
The first free-kick was punched clear by Dida. Carew was on hand to fire back the rebound left-footed… without success. ‘Ben’ deposited another ball on the head of the Norwegian attacker who flicked it goalwards, but again Dida, was alert (26’)… or well placed (45’). The play began to balance out and Caçapa was on hand to cut off Sheva everytime the Ukrainian looked dangerous... and when the ‘Ballon d'Or’ 2004 did get the upper hand oin his marker, Coupet was on hand. He saved his side just before the break, punching away a first effort (43’) and then diving away to stop a second (44’).

The man in black gave Tiago a verbal warning and every time he blew his whistle the crowd looked anxiously to see whether he reached into his pocket.

After the break, Malouda terrorised Costacurta. The Guyane-born winger took off on a solo raid in the face of three defenders but shot wide (47’). His pressuring of the defence paid off and he squared a good ball for Carew in the penalty area. The striker’s shot was blocked by Nesta, Tiago’s by Kaladze (55’). Exhausted, Costacurta received a yellow card for dragging back Malouda, lightning quick (57’). Ancelotti then made his first move by taking off ‘Billy’ and bringing in Maldini. On the hour mark, Fred remplaced Carew.
Les Lyonnais took the upper hand. Djila sent a bomb of a half-volley flashing just the wrong side of the upright, Tiago beat Nesta and Maldini but didn’t have the power to beat Dida. Fred’s follow up effort brought a similar result (70’).
Lyon were turning up the heat and Ancelotti was becoming increasing animated on the sidelines. Tiago had another go, with power this time, but was again denied by the 1.95m Dida Brazilian goalkeeper (82’).

In the final seconds of the match, a final counterattack being led by Kaka was brought to an illegal end by Tiago. This time Mr Plautz pulled out the dreaded yellow card, synonymous with a suspension from the return match at the San Siro.

Well organised at the back, Milan preserved their clean sheet. OL as well, for that matter. At the end of a second half, perfectly controlled, the Olympians have conserved their chances of qualifying for the semi-finals.

It’s true that all will depend “on one or two moments of magic,” as Houllier said. Coupet was magic tonight, and perhaps Juninho will produce a little more in the return leg. After all, we know OL like to travel…
Facebook
Tweet
Forum