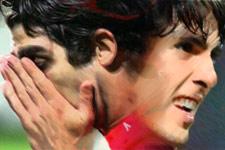 Juninho and Kaka have never played together at club level. They have done wearing the national short of Brazil, but only rarely. One will play on Wednesday, the other is suspended. Check out this criss-cross interview between the two ‘artists’…
They are not the same age, 23 years for the younger, 31 years for the elder, but talent doesn’t care about age. They have both long quit their native Brazil, three seasons ago for the Milan midfielder, five for the Lyonnais, to show their wares on the European stage. They have become pillars of their respective sides, but are far from identical players. But even if they play different brands of football, they have both scored the same number of goals in the Champions League: 11 in 36 games for ‘the Frenchman’ and 11 from 32 for ‘the Italian’. When did you first meet?
Kaka: “I think it was a league match. I only knew his name.”
Juninho: “I’m not sure, but I think it was probably with the national team.”

Are you rivals in the national team?
Kaka: “He’s not a rival, he’s a friend. We can certainly play together and we’ve already done so.”
Juninho: “No. People think so because I often replace him in a game but we’ve also played together.”

Tell us about you compatriot, the opposition and the match…
Kaka: “He’s a very good footballer. He’s the boss of Lyon’s play and not just because of his dead-ball prowess. His absence is a real blow for Lyon. He’s not irreplaceable, but he is indispensable. OL? They are a great team that have improved in recent seasons. I think the little details will make the difference because both sides are at the same level and are very well organised. Playing against other Brazilians is always a pleasure, but we’re used to it.”

Juninho: “I’ve always said he is very, very good. He’s very important for AC Milan. He plays like a real No.10. Milan are one of Europe’s best clubs with many great players. It has been the case in the past and it is the case today. The most important match? I want to say the return match. I don’t know where I’ll watch the game on Wednesday but I think I’ll be more tired from watching it than I would have been from playing in it! In this type of clash every little detail counts. To know whether or not my absence has any effect, we’ll have to see after both games… Of course there are a lot of Brazilians at OL and Milan but this isn’t a game between Brazilians, it’s a match between two clubs. We are defending the colours of our clubs.”

Finally, can Brazil be crowned world champions?
Kaka: “Yes.”
Juninho: “Yes, like several teams. I say it often, but a World Cup in Europe is more difficult to win. Brazil was world champions just once in Europe, back in 1958 (Sweden). So look out for Germany, France, Italy... Argentina...”
Facebook
Tweet
Forum