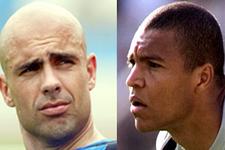 Cris and Dida never played together at Cruzeiro before heading to Europe. “When Dida was at Cruzeiro I hadn’t signed for them and when I did, he was gone.” Occassional teammates with the Brazil national squad, they come face to face this Wednesday. Check out this criss-cross interview...
When did you first play in the same match?
Dida: “It was back in the Brazilian league, a few years ago now. We were on opposite teams.”
Cris: “Oh, that’s a long time ago… it was Corinthians versus Cruzeiro. Since then we’ve played a few times together in the national team and I hope to with him in Germany.”

You compatriot’s best qualities?
Dida: “Cris is a work horse. He gets stuck in, he’s strong and goes for everything. He’s a friend and I hope he goes to the World Cup, even if it will be hard for him to do so.”
Cris: “He’s very strong at stopping penalties and I hope it doesn’t go that far, and in coming for high balls because he’s so big. With the ball at his feet he’s not very skilful… not great…”

Tell us about your opponent.
Dida: “OL are an excellent team. They’re in form and they’re getting better and better in Europe. We have to be very wary, very prudent. OL can win this Champions League but perhaps Milan wants it more. For me, Milan is the best club in Europe.”
Cris: “They’re a great club, a club that has won six European Cups. They have a lot of great players, a lot of important players. They are hard to play against but not unbeatable. For me, in Europe, first comes Barcelona, then Milan. Would I like to play in Italy one day? Why not? The football is different there, tougher. Yes OL can win the Champions League, that’s what we’re working towards. First of all we want to go further than ever before. Then if everyone works together, everything is possible.”

What are the keys to the match?
Dida: “The little things. For this first match we have to be vigilant, attentive and calm.”
Cris: “It will be the concentration over two legs that will win it. I know we’ll be concentrating. The team that is the most focused will win it.”
Facebook
Tweet
Forum