OM for OL at the Stade Gerland 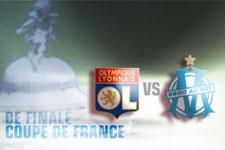 The draw for the quarter-finals of the Coupe de France, undertaken by Jean-Luc Reichmann – presenter of ‘Watch your step’ on TF1 – threw up Olympique de Marseille as Olympique Lyonnais’ next opponents.
"Another home game", that was what Lyon wanted from this draw. The presenter delivered their wishes live on "Telefoot".

It’s the first game in the 2005-06 Coupe de France that Marseille will play away from the Stade Vélodrome. The Mediterranean club has already played two L1 sides and one L2 side. In the round of 64, against Le Havre, goals to Maoulida, Oruma and Ribéry – twice – saw ean Fernandez’s squad easily into the last 32 against Metz. Pagis and Gimenez scored the goals as OM went through. In the next round, Maoulida scored a double as OM bundled Sochaux out in the last 16…

The last meeting between the two sides dates back to Week 21 of the league on 11 January. OL came from behind in a fabulous match where Tiago (53') and Govou (83’), with a brilliant volley, cancelled out Lamouchi’s first-half strike.

The other quarter-final pairings are PSG v Lille, Rennes v Montpellier and Calais v Nantes. The quarter-finals are to be played on 11 or 12 of April 2006.