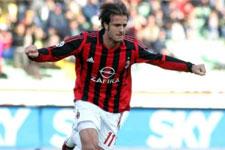 It's really starting to heat up around OL – AC Milan. Thomas Villa, a journalist with RAI 2, was at Tola Vologe on Friday. Responsible for one of Italy's most watched programs, he gave his view on the upcoming clash.
Thomas Villa

"While in Italy, most people don't think Juventus and Inter will have any problems, football lovers are divided over AC Milan's match. Everyone knows it will be tough. Milan has a lot of respect for OL, even if they're are not afraid of them, they know they are a good team. Milan is a team with a lot of experience and also with players like Kaka, Gilardino and Sheva who are capable of scoring important goals in big games. Having these players is obviously a bonus. And if Milan have been able to relinquish their hopes in the Serie A, they are still hugely motivated for the big matches. Which players are best known in Italy? Juninho and Cris who have or are currently attracting the club's attention, as you know. And of course nobody has forgotten Wiltord and his goal for France against Italy in the final of Euro 2000. It will be very, very tight. One thing is for sure, the San Siro will be a sell-out."
Facebook
Tweet
Forum