A step in the right direction... 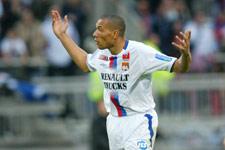 With a comfortable lead over Bordeaux, Les Lyonnais are edging ever closer to a fifth consecutive title. As for Toulouse, they’re still looking at the 40-point mark to be assured of their Ligue 1 status next season…
40 years... that’s how long it since the TFC have won at the Stade Gerland. Not in the best of form at home (2 draws against Nancy and Lens), even worse away, (2 0-2 losses to Auxerre and Bordeaux), Eric Mombaerts’ side hasn’t won since hosting Nantes on 4 February in Week 25 and a moment of Arribage magic.
Toulouse came to Lyon looking for a point without Cardy (right ankle), Congré (broken foot), Sirieix (shin) and Revault (knee).

Lyon went for freshness. Wiltord, Carew, Clerc, Abidal and Diarra, absent in the midweek Coupe de France match v Bastia, were all back in action. Berthod is the only injured Lyon player while Monsoreau and Réveillère remained with the CFA team.

As Mr Garibian blew for the kick-oof, Lyon looked to their demolitions expert Juninho to begin dismantling Toulouse.
A first free-kick from the left got the Stade Gerland in the mood (8’). He then latched onto a Wiltord cross but his driving header flew just over the crossbar (9’). His third effort found Emana’s foot in the wall (11’) and the fourth found the arms of Douchez...
Carew made his presence felt in the penalty area, leaning on Arribage he found space for the shot but couldn’t hit the target, just like François Clerc who, served up by Nino, fired inches wide of Douchez’s post (20’)…
‘Les Violets’ struggled to break out of defence and Coupet was hardly worried by Moreira’s 25th minute effort.
Malouda went into the book for a tackle on Batlles after being on the receiving end moments earlier...
Les Gones found space, but not a goal. Tiago profited from a superb interchange of passes between Juninho and Wiltord to shoot... straight at Douchez. The chances were coming thick and fast.

And when another Juninho free-kick came back off the wall again, Toulouse were suddenly breaking through on goal. Bergougnoux capitalised on the absence of defenders to square the ball for Moreira who made the most of his side’s first real chance of the match (44’; 0-1).

Shortly after the break, Les Gones were quickly back on level terms. François Clerc cut the ball back for Sylvain Wiltord and the France international knows how to make the most of this occasion. He has already taxed the ultimate price from Real Madrid and Ajaccio from Anthony Réveillère’s similar passes. Unfortunately, the in-form Douchez saved the first effort only to see Carew poke the ball home with two bites of the cherry (49’; 1-1).
Juninho and Djila looked they were enjoying a training drill until the Malian once again found the inspired Douchez in the TFC goal (52’).
Bergougnoux received a yellow card for a foul on Juninho and while the referee was ditributing the bookings Fred and Govou replaced Carew and Wiltord (64’)
Immediately, Govou stung Douchez’s palms with a rasping drive.
Juninho, from another dead-ball situation, saw his free-kick well tipped over the bar by Revault’s replacement. Mr Mombaerts had every right to be proud of his young ‘keeper who still had time to deny Sidney Govou (81’) and Malouda (84’).
Fred then blazed over after ‘Flo’ had wound his way through the defence (88’). From 31 Lyon shots at goal, only once did the ball need retrieving from the back of the net. The 32nd, and last, from Juninho didn’t come down quickly enough and flew just over.

The score remained unchanged. Toulouse earned the point they hoped for. Les Lyonnais, for the first time this season, didn’t win the league match before playing in the Champions League. But it wasn’t from a lack of trying in this match dominated from start to finish. It all bodes well for the visit of AC Milan on Wednesday.

Check out the video highlights on OLWEBPremium.