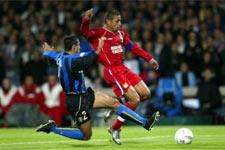 OL has played against three Italian sides in European competition: Inter Milan, Lazio and Bologna. They’ve played Inter three times. OL will therefore ‘discover’ AC Milan in the next few days, their fourth transalpine side.
The first time OL played Inter was way back in the 1958-59 season in the last 64 of the old Fair’s Cup. The Italian side were OL’s first ever European opposition. OL lost in Milan 7-0 and drew 1-1 at the Stade Gerland (goal to Cossou). It was the era of Constantino, Ninel, Mignot, Lerond, Le Borgne, Djorkaeff, Cossou… This Franco-Italian meeting is the only one to happen before the presidency of Jean-Michel Aulas.

26 years later, in the 1995-96 season, in the last 32 of the UEFA Cup, ‘Les Lyonnais’ took on the Romans of Lazio: victory 2-1 at the Stade Gerland (goals to Devaux and Deplace), and an historic victory in Roma 2-0 (goals to Maurice and Assadourian).

The Italian air suits OL! In the 1997-98 season, in the round of 32 of the UEFA Cup, OL returned to the San Siro to play Inter. Another great result... a 2-1 victory for Lyon (goals to Giuly and Caveglia). Unfortunately, Ronaldo and Co won 3-1 (goal to Bak) in France and went through.

The next season in the quarter-finals of the UEFA Cup, Bologna won 3-0 in Italy. In a fantastic return match OL went within a whisker of qualifying: they won 2-0 (goals to Caveglia and Job); a score that remained unchanged in the second half.

And then OL graduated to the Champions League... In 2002-03, in the group phase Anderson and Co produced a great match at the San Siro, once again against Inter. Victory 2-1 (goals to Anderson and Govou). Coupet wearing his white shirt was amazing… Dhoraoo playing at full-back caused the Italians nightmares… Anderson scored a surreal goal to beat Toldo. A few days later, the return match was simply unbelievable: goals, thrills, suspense and a 3-3 draw (two goals to Anderson and one to Carrière). What a first goal for Lyon, a superb team move brilliantly finished off by Anderson. The visitors were leading 3-2 before Sonny equalised. In 10 meetings: 5 wins, two defeats and three draws; 15 goals for, 20 against.
Facebook
Tweet
Forum