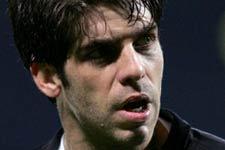 Juninho hasn’t missed a game with OL since the trip to Nancy (14 January, sore ankle). He has played eight league matches, two Coupe de France clashes and two Champions League battles, without forgetting the trip to Moscow with Brazil and 15 minutes playing time…
With OL, he started 12 of those matches, playing a total of 1,020 minutes out of a possible 1,080. 5 goals (3 free-kicks, 1 penalty and a shot) and four assists, ‘Juni’ has been very, very important in a statistical sense, but also for leadership on the field. Unfortunately he will miss next Wednesday’s clash against AC Milan. “I don’t know where I’ll follow the game yet, but it will be very hard to watch… I think I’ll be as tired after the game as if I’d played in it myself.” That’s all he wants to say on the subject, sop painful is the thought of missing it. However he’s happy to talk about Saturday’s game against Toulouse.

How do you see this match against the TFC?
“We have to be very wary. It comes just a few days after the Bastia game and just before the Milan game. I always say it, but we have to think first of all about our next game. Remember what happened to us against Rennes. Now we’ve got an 11 point lead over Bordeaux... it was bigger... it was also smaller... It changes so quickly. Now we have to concentrate on Toulouse.”

A word on this Toulouse side?
“It’s a side with experienced and proven players and also younger players. It’s a team with quality; OL is interested by Emana, for example. And then there’s Bryan Bergougnoux… In the first match Toulouse certainly played their best game of the season. We scored quickly and then they set about trying to equalise and it was really hard for us. Last season I scored two free-kicks and we won 4-0 and we played really well. Now I really want to give it everything, like always, even though it’s a long time since I had a break. I’ll be able to relax on Wednesday and not play again until the following Sunday at Troyes.”

Do you want to be crowned champion of France as soon as possible?
“First of all, I think we will be champions, but it’s not done yet. The most important thing is to get this fifth title, it doesn’t matter when. Don’t forget there are still 24 points on offer. But yes, I really do want to be crowned as quickly as possible because then we can free oursleves of pressure for other competitions.”
Facebook
Tweet
Forum