From OL to AC Milan 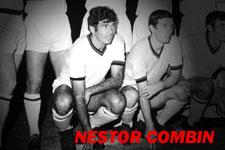 3 former Lyon players have also worn the colours of AC Milan. All three were, or are, internationals.
Nestor Combin was the first to head across the Alps. A Lyon player from 1959 to 1964, and winner of the 1964 Coupe de France against Bordeaux (2 goals), he first signed for Torino, then Juventus and Varese before playing two seasons with the Rossoneri. When he arrived he won the Intercontinental Cup in the unforgettable and incredibly violent two legged tie versus Estudiantes of Argentina: 3-0 at the San Siro (1 goal) and a 2-1 defeat in Argentina. He played alongside Rivera, Rosato, Schnellinger… In two seasons he played 50 league matches, scoring 11 goals. He then returned to France with Metz.

It was then a long wait until the 1998-99 season before another former Olympian joined the Italian club’s ranks; Bruno Ngotty, after a season in Paris he signed for AC Milan before heading to Venezia and then England.

And finally, in 2004-2005, Vikash Dhorasoo wore the colours he had always dreamed of. He did not compete in the final of the Champions League, but stayed behind in Lombardy. It wasn’t easy to force his way into the Milan midfield. He therefore returned to France with PSG.

Dhorasoo is the only player to have gone directly from OL to AC Milan.
Facebook
Tweet
Forum