Lyon battling on all fronts 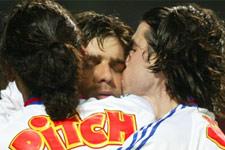 ‘Quarters’ are one of the club’s priorities… along with lifting trophies at the Stade de France.

It’s just a matter of changing competition and a few players. Gérard Houllier went for fresh legs for this challenge, which ranks alongside the championship and the Champions League.
This match allowed Caçapa and Réveillère to make their competitive returns after two and three months out, respectively. Diatta started on the left side of the defence for the first time this season.

The Ligue 1 leader was hosting one of the best sides from the second division in Corsican outfit Bastia. Did they really have what it takes to mix it with the might of Lyon? Well in the Coupe de France, anything can happen…

Bastia may have been knocked offtop spot following teir 0-1 loss to Lorient last weekend, but they still have every hope of returning to the top flight after a 12-month absence. Given their priority lies in the league, the Coupe de France proposed an interesting challenge for the Corsican outfit. Without the slightest pressure, or expectation, what did Bernard Casoni’s men have to lose? Or would they surprise even their own coach, suspended from the touchline?

For their first Cup match against first division opposition Jau, Camadini and Marester remained on the Island of Beauty with niggling injuries… Née, suspended, and Malek Cherrad, subject of an internal sanction, did likewise.

Laville, in blue tonight, returned to the Stade Gerland under a shower of applause. Gomez, the other ex-Lyonnais, sat on the bench.
At the start of the match it was Grégory Coupet that covered his team on three occasions. He claimed a dangerous ball in his own six-yard box before bowing away a second and then heading the ball away from Meslin just outside the penalty box (7’).
On the quarter hour, Juninho tried a first free-kick but the ball fell straight into the arms of Penneteau. Benzema’s first effort, released by Pedretti, ended in the stands (20’). Juninho had another free-kick, this time punched clear by Penneteau… Benzema latched onto the loose ball and crossed for Cris who saw the ball come back off the woodwork.

At the other end of the field, Laville worried his former ‘keeper but his header passed the wrong side of the upright. Benzema was the next, unable to break the deadlock as his chest control and volley forced Penneteau into a save low to his left (33’).
For the visitors, Diane and Ghisolfi saw yellow as the ‘keeper was busy denying wave after wave of Lyon attack (40’).
Govou found the space to shoot… saved by the feet of Penneteau… Réveillère blazed over… Fred’s lob went wide after a superb pass… Juninho’s bicycle-kick lacked power…

Mr Kalt sent both sides to the changing-rooms with the score locked at 0-0.
After the break, Penneteau then had to stop his own side from giving the hosts the lead, conceding a corner from Laville’s deflection (54’). The ‘keeper then produced a brilliant save to deny Fred the opening goal (55’). But there was nothing he could do to deny Juninho just seconds later. All of 25m from goal, the Brazilian let fly with a monumental shot which crashed home off the underside of the crossbar, before running to celebrate with the 29,026 supporters present at the Stade Gerland (56’).

Lyon laid siege to the visitors’ goal. Diatta, fired a header against the post. Barthelemy responded with a first time shot but failed to hit the target (62').
Ben Saada was introduced off the bench and he tried to slice his way through the Lyon defence but his effort sailed into the stands (71’). Clément, and then Ben Arfa came in for Pedretti and Fred.
OL then closed up shop and let their offensive trio try and a second. Benzema squirmed his way into a shooting position, but against Penneteau stood in the way (85’).

The three minutes of stoppage time were not a nervous time for Lyon, they could even have made it 2-0 with a last second Juninho free-kick, but this time the ball flew high.
After crushing Grenoble 4-0… After beating Ajaccio 2-1… Les Lyonnais are into the quarter-finals of the Coupe de France beating Bastia 1-0. On leaving, the supporters let “Flo” Laville know that he will always be at home at the Stade Gerland.

Check out video highlights of the match on OLWEBPremium.