A look at the Sporting Club de Bastia 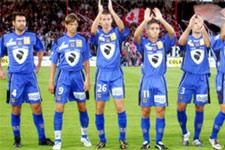 For the third time in a row, Les Lyonnais are playing in the round of 16 pf the Coupe de France... this time, they hope to make it into the next round.
At last they are playing at home, which hasn’t happened in this competition since the visit of Châteauroux in the round of 32 back in 2002 (0-2). There was the victory against Bourg at the Stade Gerland in 2004, but officially that was the Bressans home game. This will be the 29th time OL have played in this stage of the competition: 16 eliminations and 12 qualifications. The last was in 2001 against Fontenay (2-2 and qualification on penalties).

This Cup clash with Bastia isn’t a first. Back in 1982, the two sides went head to head in the old hoe and away format: Bastia won 2-0 in Corsica and OL won the return at Gerland 3-2 (Furlan, Nikolic et Emon). The islanders went through only to be knocked out by Saint-Etienne 2-0 in the semi-finals.

The two sides have also met in the Coupe de la Ligue at the Stade Gerland. It was in the rd of 32 in 2002/03. Lyon won 2-0 thanks to a Luyindula double. Penneteau and Ben Saada were already playing for the Corsicans.

Bastia won the Coupe de France in 1981 against Saint-Etienne 2-1 (goals to Marcialis and Milla); they played and lost the 1972 final against Marseille and another against Lorient in 2002 (1-0) with a side that featured Essien and Vairelles.

Bernard Casoni’s side played in Ligue 2 on Friday and lost 1-0 to Lorient. But Pierre-Yves André and Co are still atop the standings having played one game more than Sedan; 53 points (15 victories, eight draws and seven defeats; 40 goals for, 23 against). Promotion is not yet a sure thing. With eight games left there are only points separating the leaders and sixth-placed Caen. Laville, Née and Gomez, all former Lyon players, are part of the Bastia set-up. The Sporting Club finished 19th in Ligue one in 2004/05 and ended up two points short of the safety zone. In the last visit to the Stade Gerland, the game finished 0-0 - Penneteau, Ben Saada, Jau and André all played in that match. The former Nice striker Meslin is the club’s leading scorer with 10 goals; André 8, Jau 7, Camadini 4, Née 2… As for Laville, he has racked up 10 yellow cards. The majority of the squad has L1 experience: Penneteau, Laville, Camadini, Meslin, Cherrad (suspended on Tuesday), Née, André, Sauget, Diane, Jau...
Facebook
Tweet
Forum