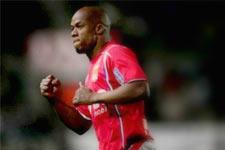 Yet another 4-0 win for Lyon. The Olympian goals came from Wiltord (26, 52), Pedretti (45+2) and Malouda (58). Gérard Houllier’s men now have an 11-point lead over second-placed Bordeaux.
Just eight rounds before the end of the French Ligue 1, everybody’s fate is slowly becoming known. Some are on the way up, others are on the decline… Down in the danger zone, Metz, Strasbourg and Ajaccio can no longer afford the smallest error if they are to remain in the top flight. Troyes are not in the clear yet and Sochaux are still looking over their shoulder…

Lyon may have changed competition, but only Pedretti came into the starting line-up – the only change from the regular starting XI.

Coupet made a first save and Cris stayed down after a solid challenge... more of a scare than anything for the Brazilian...
The supporters cheered.
In the opening minutes, Ilan Araujo showed off his balance and skill in the Lyon penalty area before François Clerc whipped the ball away. After eight minutes, Juninho lined up his first free-kick of the evening but Teddy Richert wasn’t worried. Idem for Jérémy Menez’s effort on Grégory Coupet’s goal. Patrick Müller armed with a vicious outside of the right foot shot led the Lyon charge (18). Then Florent Malouda skinned Calve to set up Carew but the rebound beat the Norwegian who couldn’t score with the goal at his mercy.
Les Gones took control of the ball before Nino exploded the Sochaux defence. A wonderful control and then a devastating dribble around two opponents before passing the ball through the tiniest gap for his tenth goal of the season (26; 0-1). OL’s top scorer was in action again with a half-volley from Clerc’s cross but the ball was turned behind for a corner.

Malouda and Abidal were a nightmare for the Sochaux defence and Richert could do nothing as the Guyane winger found the woodwork.

There was only one team on the pitch at the Stade Bonal.
Juninho tried his chance again from 25m out but didn’t hit the target. OL left their opponents nothing, not even the crumbs, and that enabled Pedretti, brilliant all night, to double Lyon’s lead. In playing a neat one-two with Müller, the ex-Sochaux midfielder had time to line-up his shot and hit the target, despite a deflection off Menez (47; 0-2).

After the break, Richert remained in the changing-rooms… Martinovic was in goal. Calve was still struggling with Malouda who clearly had the upper hand down the left. Wiltord profited to head home another cross from the left at the near post, his second of the night and Lyon’s 54th this season (52; 0-3). Les Sochaliens were beaten. Martinovic, only just on the field, wasn’t given time to get his bearings before he was retrieving the ball from his own net. Juninho fired a missile at goal. It proved too hot to handle for the ‘keeper’s gloves and Malouda had the simplest of tasks to poke the ball home (57; 0-4).
Just a few minutes later Wiltord controled and shot in the one movement, only to see Martinovic somehow deny him a hat-trick.

Finally the hosts were allowed to breathe... Les Lyonnais as well, keeping an eye on Tuesday’s game against Bastia. Houllier made his frrst changes. The players took the foot off the accelerator but didn’t release their grip on the match. Lyon moved to 68 points, 35 taken on the road – obviously Lyon travels first class.


Check out the video highlights of the match on OLWEBPremium.