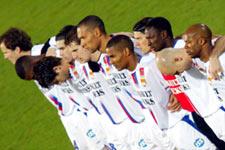 18 Lyonnais will make the trip to Sochaux. Cacapa, Réveillère and Ben Arfa are playing with the reserves. Monsoreau and Berthod are still unavailable.
The Squad:

How are you approaching this match?
“It’s a very important match to which we’re giving the utmost attention and concentration. We are not thinking about AC Milan at all. The media has seemingly forgotten the three matches before that one. Those three games are our priority. We’ve kept a lid on all the hype that followed the draw. We haven’t won the league yet and we know it. We’re taking each game as it comes.”

How is the squad?
“The attitude of each and every player has always been remarkable. I don’t see why that would change now, two months before the end of the season. I repeat that the league title is the club’s number one priority. The best boost before the PSV game was the win against Ajaccio. The three games before Milan have to be boosts as well. What makes us win, is understanding the team comes before the individual. The team gets along very well... so lets do it.”

How do you feel about all these upcoming games?
“There will obviously be more recovery than training in between games. I have every confidence in the medical staff. I sioncerely hope we’re playing every three days until 20 May. The grounds aren’t as heavy now and the players are drying out…”
Facebook
Tweet
Forum