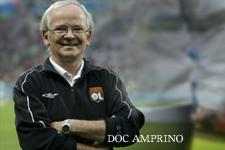 No regular at Tola Vologe could have failed to notice the big news of the week: the Olympique Lyonnais injury list is shortening, slowly but surely...
Club doctor, Jean-Jacques Amprino, gives us an update on OL’s various injured players.
Sylvain Monsoreau suffered a strained left hamstring playing against Bordeaux on 5 February. He has been slowly building up the number of treatments and indoor running. On Wednesday or Thursday he will undergo an ultrasound which should confirm the good progress his injury has been making. The injury “has healed about 80-90% but we’ll wait for the results of the ultrasound before getting him back on the park, tomorrow or the day after.” He should resume ball work at some point next week. “There’s still a phase of physical work to get through with Robert Duverne at the end of which, he’ll decide if he’s ready or not.”

The news concerning Jérémy Berthod during Tuesday’s morning’s session was reassuring for Lyon fans, who can expect his imminent return. The young full-back passed an MRI scan on Monday which showed that the healing of his muscle strain, contracted against Ajaccio on 4 March, was coming on along well. He can start running under the supervision of Robert (Duverne).”

“Claudio Caçapa and Anthony Réveillère are both ready for action. All the examinations, scans and muscle strengthening exercises have given the green light, around eight weeks after the initial injuries.”

Regarding the concern surrounding Mahamadou Diarra, who injured his back during OL – PSV, OL’s doctor again had good news: “He didn’t complain today and I think it’s probably finished.”