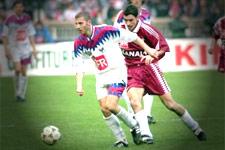 This Saturday at 20:00, Olympique Lyonnais host the Football Club de Metz: a team fighting for its Ligue 1 survival.
Background

The Lorraine-based club are fighting against relegation from Ligue 1. In the first match between the two sides this season, Metz were outclassed 4-0 by Gérard Houllier’s side at the Stade Saint-Symphorien in Week 12.

Ahead of Round 30 of Ligue 1, FC Metz are currently 19th in the standings with four wins, 11 draws and 14 defeats. 21 goals for, 44 against. Away from home Metz are yet to win, with seven draws and eight losses. 11 goals for, 27 against.
FC Metz has had a terrible 2005/06 season. Their highest place was 16th in Round 2. Since then, Metz have never left the relegation zone. The club was very active during the winter transfer window, completing the signing ofAlioui (on loan, Perugia), Diakité (Vitoria Setubal), Pimenov (on loan Lokomotiv Moscow) and Youla (on loan, Besiktas). Several players left the club, most notably the Korean Ahn who joined German outfit Duisburg.

And things are going better with the side currently undefeated in their last five games, with two wins over Marseille and Monaco and three draws against Auxerre, Bordeaux and Nancy.
Facebook
Tweet
Forum