The stats from OL – PSV 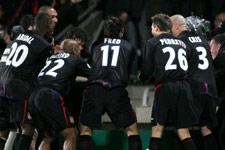 At the Stade Gerland, Les Lyonnais dominated PSV and ran out 4-0 winners. They are qualified for the quarter-finals of the Champions League… for the third time in a row.
OL has played eight matches in this season’s Champions League: seven wins and one draw; 18 goals scored and four conceded. To date, only Barcelona boast a similar record. 23 players have taken part in the eight games and no player has played all 630 minutes. Only Carew and Wiltord have played in every game.

Coupet has made 48 saves, including five decisive saves; Vercoutre made seven saves against Rosenborg.