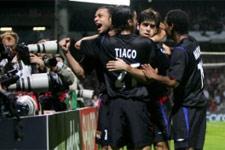 At the end of a footballing demonstration, a veritable master class, Les Lyonnais qualified for the quarter-finals of a Champions League in which they continue to produce out of the ordinary performances.
Magnificent and frighteningly reassuring, the qualification of Olympique Lyonnais at the expense of PSV was a one-sided affair. More than just the victory, it was the way in which Tiago and Co went about it that caught the eye: it was a football recital.

At kick-off, despite the Dutch side’s slim chances of upsetting an 11-match unbeaten home run in Europe, French nerves were certainly apparent. All the statistics in the world did little to calm the Lyon, and French, football public that has fallen in love with their team.

Edgy, the start of the match it was François Clerc whose runs down the right-flank (3’ and 5’) underlined his talent and had the Stade Gerland at fever pitch, and he didn’t hesitate to shoot on sight (11’ and 16’).
Beating out the rhythm for his teammates, Juninho beat two Dutch players before seeing his effort end in the gloves of Gomes (4’). A free-kick from 35m out had the Gerland gripped with anticipation, but the ball flew wide to the right (8’). Just minutes later the Penabucano native flew in on Afellay. Unmoved by the 37,901 spectators, Mr Riley handed out the yellow card to the captain that will see him suspended for the first quarter-final (13’).

In an effort to make the game safe as soon as possible, OL resumed the attack. John Carew screwed his shot wide (14’) while Florent Malouda, liberated from his recent defensive duties regularly had the upper hand over a Théo Lucius strangely vulnerable. His toe-poke was too soft to worry Gomes (17’). But on another of his runs, the Guyanais cut the ball back perfectly for Tiago to open the scoring before running all the way back to the bench to celebrate with Fred, the new ‘Papa’ in the team (27’). But Lyon didn’t sit back and Carew found Gomes (29’) and then the sky after another Malouda cross (41’).
Nino went within a whisker of reaching Eric Abidal’s cross while Tiago, omnipresent in the opening 45 minutes broke away on the right and crossed for Juninho whose shot struck the post after a brilliant Gomes save (36’). An exceptional first half was capped off by the Portuguese midfielder who doubled the mark after a Juninho free-kick was poorly cleared by the Batavian defenders. From the left, the former Chelsea player edged Lyon a little closer to the quarter-finals and warmly received the Gerland’s ovation (46’). To the cries of ‘Tiaaaago’ alternated with those of ‘Whose not on their feet is not Lyonnais’ the Lyon players made their way to the changing-rooms with a two-goal lead after a brilliant opening 45 minutes. All the same, the side did allow first Farfan and then Koné to try their luck but they only found Müller and Abidal in their path.
Culina was doing his utmost to stop Juninho and Cocu, an experienced Champions League campaigner (115 matches) was shown his marching orders for an aggressive challenge on Clerc’s ankle (41’).

If the first half had been that of confirmation, the second moved into the realm of the sublime. Clerc crossed without finding a taker (55’). Malouda, decidedly on form, delivered to luminous passes for Sylvain Wiltord but Nino failed to make the most of them (55’ and 62’). Koné was living a nightmare and on the rare occasions he managed to lose his Brazilian shadow he ran into an irreproachable Müller (63’).

For his part, Cris had the fans on the feet. More than his habitual tackles, he added some charges forward (64’) and a centre-forwards shot (75’). He received the standard ovation of ‘Cris! Cris! Cris!’ but also set a rare Mexican Wave in motion around the Stade Gerland.
To transform an unforgettable night into a mythical one, Tiago superbly set-up Fred but the shot, saved by Gomes fell to Wiltord who easily added to Lyon’s lead (72’).

Gerland was given the opportunity to send off their heroes Juninho (76’) and Tiago (80’) with standing ovations.
Malouda crossed one last time (88’) before Fred scored the goal that everybody wanted him to score (90’). With the dummy in his mouth to celebrate the birth of his baby daughter it was a brilliant way to cap off a brilliant evening.