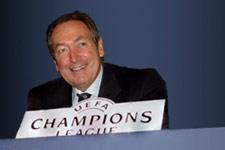 Gérard, a word on your squad?
“I wanted to take a 20-man squad, including some young players. It’s good for the youngsters to come and see what it’s all about without necessarily worrying about playing in the match. Diarra, Tiago and Carew are all available.”

With Liverpool you were used to playing these return games with a 1-0 advantage. What do you have to do?
“I’m not about to start reciting my old team talks, even though I do have a good memory. We’re in a good position, but we’re also aware that we’re not qualified yet. We have the same chance, perhaps a little better, than our opponents. It will be important to keep our heads screwed on. In Eindhoven it was physical and tactical. I think here it will a little more open. We were very proud of our match in the first leg.”

Is this game really important for the club?
“There’s a lot at stake for both clubs in this competition. That means lots of very tight games that can be decided on the toss of a coin. Lyon was very frustrated last season, just like Barcelona was with Chelsea. But the past is in the past. OL wants to win to show it’s still improving.”

Can OL lead French football back to the glory days?
“The coach and the players are totally focused on this match. The goal is qualification and that requires all our concentration and efforts. We don’t claim to be the Jeanne d’Arc of French football.”

Will the public be important?
“A Champions League match is one charged with emotion. What’s more, the return match is being played a tour home. The public will have an important role just like the PSV fans did in last season’s penalty shootout.”

Do you want to try and protect the one-goal lead?
“I know what we’re going to do. More than protect, we’re going to control what happens. The notion of control will be very important and we want to avoid penalties, even if we have worked on that at training.”

After the coach, it was Grégory Coupet’s turn to face the media.

Are you one of the keys to qualifying considering you don’t want to concede any goals?
“That’s a fairly good resume. But opposite us there will be a determined team, very dangerous from set pieces. We have to be careful.”

This could be a third consecutive quarter-final appearance for OL?
“It’s an obligatory stop on the way to our goal which is the final in Paris. With regard to PSV, we want to turn around the result from last season. We were really frustrated by that elimination without being beaten.”

Will every little detail be important?
“For me, I have to be decisive in the saves I make. In the first match, we had a bit of luck and we knew how to use it to our advantage. I hope it’s the same on Wednesday.”

How are you approaching this return match?
“We want to play our normal game and be very tight at the back. The fact that we’ve had changes in defence? I talk a lot with my central defenders, particularly when I’m coming for a ball. There’s no problem, the lads know exactly what they’re doing. This competition demands that we surpass ourselves and we’re capable of doing just that.”

Has OL learnt from its past campaigns?
“I think OL has very good European experience, as does our public. We are desperate to do well and there’s a great feeling around the team.”
Videos
Facebook
Tweet
Forum
Videos