Finish the job at Gerland... 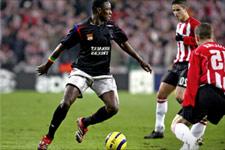 On Wednesday evening, not a single Lyon supporter wants to miss the match. It’s the chance to qualify for the quarter-finals of the Champions League against PSV, that ‘Dutch enemy’, so annoying these last few years.
To kick Guus Hiddink’s side out of Europe, the Stade Gerland is sold out. The public support can have an effect on a visitor, even one used to such big occasions. In Lyon’s den, the following has become essential over the years. “The Lyon fans want to play an important role in the outcome, just like the PSV fans did last year in the penalty shootout…” Gérard Houllier subtly encouraging “his public”, so that they are up to their normal high standards on the night.

In winning 1-0, two weeks ago at the Philips Stadion, it’s obvious that Juninho and Co have an advantage… but not large one. The first match was a terrific battle. Ooijer was injured and will play no part in the second act. Cris broke his nose in a clash with Fanfan. Diarra still has a sore back and Coupet cut his tongue. But all three Olympians are present. “The tackles were flying in…” Gérard Houllier admitted that he hadn’t realised, “watching live, the intensity of the challenges.”

This PSV team may not have the same face as the one from last season. But deep down, it hasn’t changed. It’s a team that takes its chances. It’s a team that takes measured risks. It’s not champagne football but it’s ever so effective with the speed of Farfan and Koné, goalscorers par excellence, the organisation of Cocu, the workload of Simons, the calming presence of Alex and the devastating activities of Vennegoor on the ground as well as in the air. It’s a team capable of piling pressure on all over the park and then bursting forward into the opposition penalty area in no time. Will they goal all out in attack? It’s not really their style... The Ghanaian Addo should replace Ooijer in the centre of the Red and Whites’ defence. Lamey and Vennegoor are doubtful. The big striker’s absence would be a huge blow for the Dutch league leaders.

OL is 90, or 120 minutes from a third consecutive quarter-final appearance. “We’re only halfway there...” Juninho underlines his great professionalism. There’s no question of letting thoughts stray to Friday’s draw before claiming the Dutch scalp! “A quarter-final has to be earned...” An admission from Malouda. Slated in Rennes, triumphant in Corsica, will Les Lyonnais be tempted to try and protect their one-goal advantage? “We’re going to play are normal game while watching this PSV side very carefully, who are just as string as ever.” Juninho doesn’t go out of his way to answer the question, even if he does admit it will be a tactical battle. ‘Juni’, Tiago and Diarra are all threatened with a supension from the next match should they receive another yellow card. “That won’t change the way we play at all,” responded all three in turn.

Govou, suspended; Cacapa, Monsoreau, Berthod on the injured list; Réveillère, only just back training; Tiago, Diarra and Carew just over niggling injuries, Gérard Houllier will once again have to mix and match. “I know what we’ll be doing. More than just protecting our lead, we’ll control everything that happens on the pitch. We have just as much chance, perhaps even a bit better, than our opponents.” The Olympian coach didn’t reveal his starting XI or the formation but did suggest the game would be more open that that at Philips Stadion. And like always, every little detail will be important. “We have to be string in defence and watch every single dead-ball situation…” Grégory Coupet is well-placed to see he side advance to a new quarter-final: “which is just a obligated stop on the way to reaching our goal which is the final at the Stade de France.”

It would be a surprise if Lyon were to start with just two in the midfield like they did against Nantes and Rennes. Will Abidal play in the middle or on the left? That will decide where Malouda plays. Ultimately it doesn’t matter. A Champions League match is all about guts and desire... they are what will count most if Lyon are to continue on their merry way. OL is effectively halfway there and seems so well on the way that it would be a shame were it to end on Wednesday evening. Finally, Mr Riley, the referee, will have his whistle handy to ensure the debates stay within the boundaries of the law.
Videos
Facebook
Tweet
Forum
Videos