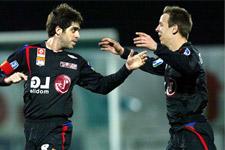 Completely drowned out by coverage of PSG-OM, Lyon’s match against Ajaccio could have passed almost unnoticed, had it not allowed the quadruple champions of France to extend their lead at the top of the standings...
Methodical and conscientious, Gérard Houllier’s team didn’t make any waves. After crashing out against Rennes last weekend, the Lyon players and staff realised the three points against Ajaccio were a necessity. At kick-off however, the Stade François-Coty, was not looking the most welcoming of places. AC Ajaccio had played bette rat home against the big teams than the league table would suggest. After drawing against Lille (Rd. 2), Le Mans (Rd. 4), Lens (Rd. 10) and PSG (Rd. 19), the Corsicans then beat Marseille (Rd. 23) and Auxerre (Rd. 25).

To make matters worse for the quadruple French champions the injury curse continues to hound OL. After the late calf strain to Carew, Djilla Diarra withdrew from the squad just seconds before kick-off with a sore back. Racked with injuries, Houllier’s side featured the return of Jérémy Berthod on the left and starts for Clément, Pedretti and Abidal.

Profiting from a spot of rustiness, the Corsicans started the match in full swing, suggesting a tough evening for Les Lyonnais. Cris surprisingly missed a ball that allowed Edson to warm the gloves of Grégory Coupet (3’). The France ‘keeper the looked on as the ball flashed across the face (11’) before capturing an effort from Mandrichi (12’), goalscorer in the Coupe de France clash between the two.

In perfect control of their opposition, the Olympians weathered the storm before placing their imprint on the game. After a week’s training at Tola Vologe, François Clerc and Jérémy Berthod were very much in evidence on the flanks. Even more so was Florent Malouda who, after two great runs into the area (10’ and 18’), was just centimetres away from converting a cross from Clerc with a right-foot effort (20’) Moments later he could only watch as another effort flew to the left of Porato’s goal after an overlapping run from Berthod down the left (28’). Enjoying the lion’s share of possession, Lyon set up camp in front of the Corsican goal. Juninho almost found his teammates heads on two occasions (13’ and 34’). Following his compatriot’s lead, Fred began to get the upper hand over the local defenders. After a whot missed the target (30’), he confirmed his status as the ‘King of the one-two’ with Sylvain Wiltord in the area (33’). A little too ambitious was Nino’s attempts to return the ball a third time to Fred which was anticipated by Porato who made the save.

Coupet and Co should have been heading to the changing-rooms satisfied with a good 45 minutes, but Berthod’s grimace in pain ruined that. Obviously very distressed, the left-back made way for Karim Benzema and saw his defensive duties fall to Malouda (38’).
Not fazed, Les Lyonnais returned from the break win equally determined fashion. Claims for a penalty for the Lyon No.19 were replaced with a yellow card for simulation by the referee, Mr Layec (49’).
Despite dominating possession, the visitors were struggling to approach Porato’s goal. Of course that doesn’t pose a problem for Juninho. A free-kick from fully 40m out ensured this match would be remembered for some time. He floating shot was simply unbelievable and left the Ajaccio ‘keeper stunned (62’). Completely shocked, even the ten other Lyon players hesitated to celebrate the goa, scarcely believing their eyes.
Inspired by his captain, Fred then delivered the knockout punch, latching on to a superb Benoït Pedretti through ball. A little jink eliminated Porato before sliding the ball home between the legs of Laurenti (77’).
Having done his job, Juninho left the field to the generous applause of the Ajaccio public.
Les Gones thought they’d done the harde part and let Ajaccio back into the game as Lucas (84’) got the goal that could have meant a nervous few minutes.

After shooting too high (87’), Benzema played a neat one-two with Wiltord to make the game safe and score his first goal in Ligue 1 (88’). Just after another Nino goal was correctly ruled out for offside, Mr Layec blew the full-time whistle at the end of an accomplished Olympian performance.

With a nine-point lead in the standings over Bordeaux Gérard Houllier’s side bounced back in style and also sent a message to all those that constantly look to belittle their league advantage: this truly is a great team. Just four days from the return leg of the Champions League last 16, the team can now calmly and quietly turn its attentions to PSV.