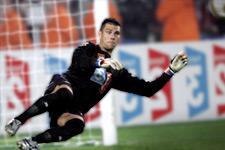 Before donning the tipster’s hat for Round 29 of the league, Rémy Vercoutre talks about what’s going on with him and Lyon. He’s not worried, but knows they need to bounce back against Ajaccio.
His Ligue 1 tally is blocked at 25 matches including five with OL. His first match for Lyon was, incidentally, against Ajaccio. “I remember it well. That evening, Paul le Guen rested several players and it was the first pro match for Florent Balmont. We won 1-0 thanks to a goal from Tony Vairelles. It’s a nice memory, I made a few saves. I remember that it was the match before the Champions League return leg against Inter Milan. Finally in L2 with Montpellier, we won 2-0.”

Rémy Vercoutre has played in the Coupe de Ligue clash against Nantes and the Champions League match against Rosenborg and has also played two games with the reserves. The rest of the time he’s been on the bench, supporting his mates. How was the start of this week, a little out of the ordinary? “It was bizarre as there was hardly anyone at training. We were waiting for the return of the internationals. I worked with Jo and some of the CFA players came and played with us. It was fun to play along side the youngsters.”

Beaten, or rather hammered, by Rennes, how is the atmosphere in the changing-room? “No-one’s worried. We know that in football, you have to question yourself permanently. We have to redo our homework. We had to ask ourselves some tough questions and we’re all focused on the match against Ajaccio, especially after Bordeaux won 2-0 at the Stade François-Coty. Everyone knows that each one of us messed up the game against Rennes but I don’t know if there was any particular reason. At any rate, it wasn’t due to tiredness. The calendar is only going to get more and more hectic. It will be all hands on deck as we try and win all three of our goals this season.”

[IMG40204#L]
Disappointed not to have seen a single Lyon player in the starting line-up against Slovakia and then pleased by the performances of Abidal, Wiltord and Malouda, Vercoutre was satisfied by the performances of the French in general, including Fabien Barthez ‘who gave a good account of himself.’ He claimed this French team has some good days ahead of it before returning to Saturday’s match. “It will be the same as the Coupe de France match. The Corsicans would be a different team with a little more experience. It will be tough considering their situation. They still have a couple of aces up their sleeves in their battle for survival. We’ll have to be up for it…”

Now for his role as guest tipster for Round 29 of the league, Rémy chose three matches.

Sochaux – Bordeaux: “I spoke with Ben and Sylvain, our former Sochaux players and they told me that Bordeaux hardly ever win at the Stade Bonal. I hope that’s proved again this Saturday because Sochaux are in form.”

PSG – OM: “First of all, lets hope the game gets played. Then I’ll say PSG. They need a win to get started again.”

Troyes – Auxerre: “As a supporter of Strasbourg, I’d like Auxerre to win with a goal to Peguy. When we see how well the Alsace team plays and all the problems they’ve had since the start of the season, you have to say that sooner or later they’re going to turn the corner. They can still survive.”

And to finish, a word on Montpellier? “Montpellier have a good calendar. I spoke to Bruno Carotti recently and he told me the team is feeling good and is positioning itself to challenge at this end of season. Having not been in the top three places means they’re mentally fresh. It would be great if they can return to L1 and it’s not impossible.”
Facebook
Tweet
Forum