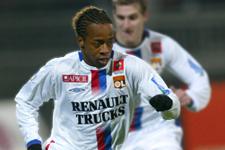 Following the unexpected defeat at the hands of Rennes OL have received another blow with an injury to Sidney Govou.
Sidney Govou fell badly on Sunday and suffered a dislocated shoulder which was immediately put back in place. He is expected to be out of action for three weeks. "Sid" had an appointlent with shoulder specialists at the Jeanne d'Arc de Lyon clinic. He joins Monsoreau, Cacapa and Réveillère on the injured list.

As for Portuguese midfielder Tiago, he has not been included in his country’s squad for Wednesday’s friendly, but has not yet seen OL’s medical staff after receiving a knock on his ankle in the first half against Rennes. “As far as I’m concerned, there’s no problem,” confirmed Doctor Jean-Jacques Amprino.
Facebook
Tweet
Forum