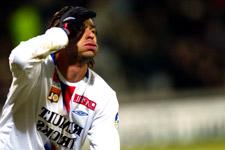 Reactions to the match OL-Rennes
Laszlo Bölöni: We certainly played our best game of the season. The tactics that we worked on all week paid off, so obviously I’m delighted by this performance and very proud of my team.
I’m also well aware that Lyon’s Champions League game on Wednesday took is toll physically on the players.

Jean-Michel Aulas: We weren’t strong enough, physically or mentally. We weren’t able to fight back.
Certainly Rennes are enjoying a good spell and again showed that they are enjoying incredible success in front of goal.
My current feeling is a sense of disappointment mixed with a certain concern. Now we have to find the answers so that this doesn’t happen again.
As luck would have it, Bordeaux were held to a home draw by Metz. So we’re still six points in front, but I repeat: We must not write off this loss. We need to work harder to win our next game.
The biggest shame is that if we had won tonight we would have done the hardest part in our race for the title. Instead, Bordeaux have climbed another point closer. Now we have to keep working because now it’s going to go down to the wire with all the matches coming up.

Concerning the France team, I remind everyone that I’m very happy by the selection of François Clerc. The problem between us the France coach concerns Eric Abidal.
We spoke to Raymond Domenech and asked him not to select the player, or to select him, but not play him. Abidal is returning from injury and playing too many matches straight away could cause a relapse. The doctors have confirmed the heightened risk. Despite the opportunity to select other players, the coach still wants to play him so we’ll let him go, so as not to penalise the player, but he will have a medical certificate preventing him from playing.

Gérard Houllier: Today was a terrible performance, right across the board. The only good point is that, despite the defeat, the players have remained a unit. Tonight we were missing a bit of everything, but especially freshness. I think we were also a bit mentally tired. And then of course John Utaka was having one of those nights.
If you start this type of match badly, then it becomes very hard to comeback. That’s the sport. There are days like today when every goes wrong.
I also think we have to put it into perspective, there are still 11 matches left.
It’s a well-known saying, but it’s better to lose once by three goals than three times by one goal. Perhaps this defeat is a cloud with a silver lining. Now we have to have a look at ourselves, see what went wrong and get back to work.
But we also have to put it into context. If someone had proposed a six-point lead after 28 games and only two defeats, we would have taken it then and there.